By Mirabai Starr
A devotional book about Latin America's most cherished spiritual icon.

Mirabai Starr, who has put together Sounds True's "Devotions, Prayers & Living Wisdom" series of devotional books, has taught world religions, translated the Spanish mystics Teresa of Avila and John of the Cross, and created numerous workshops. In this volume of the series, she trains her insightful eye on Our Lady of Guadalupe.

This spiritual figure, appearing to humble peasants, represents both the Christian Virgin Mary and the indigenous goddess figures of the Aztecs. The original image of the Lady appeared in 1531, and since has become Latin America's most cherished spiritual icon. She is known worldwide as a force of the Divine Feminine.

In three chapters Starr presents stories, prayers, and commentary on Our Lady's significance, exploring the miracle of the apparition; mercy and compassion, and social justice. The book opens and closes with a prayer in which she is addressed as Divine Mother, Sweet Virgin of Tepeyac, Mother of All Peoples, Virgin of Guadalupe, Liberating Mother, and Mystical Rose – titles which catch the many aspects of her presence to followers. 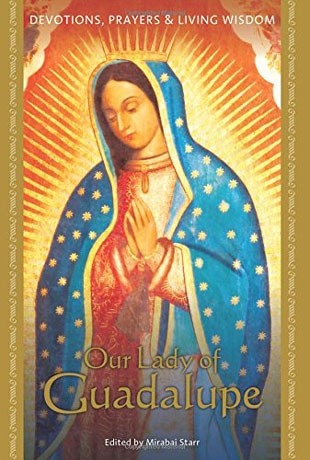