The Rock Maiden A Chinese Tale of Love and Loyalty

By Natasha Yim
A re-envisioned story about a famous rock formation in Hong Kong.

Natasha Yim is an American Chinese author of fiction and nonfiction works for children and young adults. In a postscript to this children's picture book, she tells of growing up in Hong Kong and being captivated by the legend behind a famous rock formation there shaped like a woman and a child. Here she retells the legend of the Amah Rock and adds a new, happier ending.

Ling Yee, a beautiful Chinese maiden falls in love with Ching Yin, a kind young fisherman. They marry and have a son. Then one day Ching Yin and the other fishermen are caught in a storm at sea; only his sampan does not return. For months Ling Yee goes to the top of a hill, her baby on her back, and watches for his return. Then Tin Hau, the patron goddess of fisherman, takes pity on the grieving mother and child and turns her into stone.

A year later Ching Yin does come back to the village where he learns of his wife's love and loyalty. He rushes to the Rock Maiden, and Tin Hau once again intercedes. A bolt of lightning cracks open the stone and the family is reunited.

Pirkko Vainio has created some beautiful watercolor pictures to illustrate this story. The soft colors reflect the different moods of the story, from golden spreads signifying celebration and happiness to greys and blues reflecting Ling Yee's grief, to sunrise yellows at the happy ending. The book is designed for ages 4 and up. 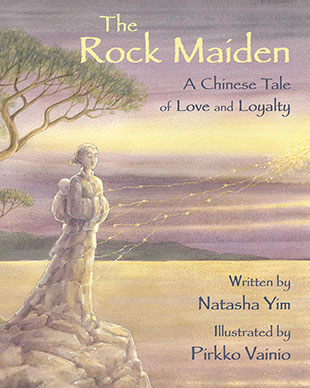