The Poetry of Impermanence, Mindfulness, and Joy

By John Brehm
A superb collection of 125 poems, by Buddhist and non-Buddhist poets, on essential concepts in Buddhism.

John Brehm is the editor of this sterling collection of 125 poems. He is the author of two award-winning books of poems and the associate editor of The Oxford Book of American Poetry. His awareness of the value of this literary genre is matched here by his respect for Buddhist themes of impermanence, mindfulness, and joy.

The collection spans the centuries from eighth century China to our times. The editor was so moved by poems on his themes by non-Buddhist poets that he included them in the collection. Look for works by William Butler Yeats, Shakespeare, Denise Levertov, Pablo Neruda, Robert Frost, and others.

While those in the East agree with Ikkyu who states "only impermanence lasts," many in the West reluctantly seek to avoid thinking about this law. Brehm salutes the childlike acceptance of Ryokan's wise mantra "just this!" in a very subversive poem about his playing with some village children; it challenges our propensity for reaction, judgment, and aversion.

"I kick the ball and they sing, they kick and I sing.
Time is forgotten, the hours fly.
People passing by point at me and laugh:
'Why are you acting like such a fool?'
I nod my head and don't answer.
I could say something, but why?
Do you want to know what's in my heart?
From the beginning of time: just this! just this!"

Here are some of our other favorites:

Savor with mindfulness these poems that shine a light of few essentials in Buddhism that are also embraced by non-Buddhists.

Read a practice on attention 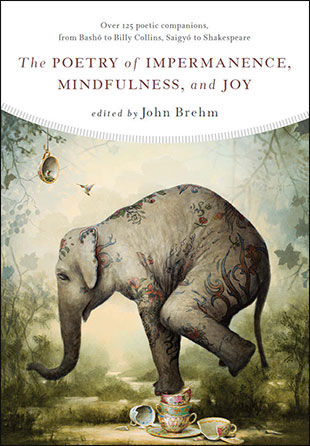