Affluenza How Overconsumption Is Killing Us — and How to Fight Back

"More than ever, we have big houses and broken homes, high incomes and low morale, secured rights and diminished civility. We excel at making a living but often fail at making a life. We celebrate our prosperity but yearn for purpose. We cherish our freedoms but long for connection. In an age of plenty, we feel spiritual hunger," observes David Meyer, a psychologist.

The Oxford English Dictionary defines affluenza as "a painful, contagious, socially transmitted condition of overload, debt, anxiety, and waste resulting from the dogged pursuit of more."

This creative and cogent paperback is based on two highly praised 1997 PBS documentaries pointing out the severe and widespread fallout from affluenza, including environmental degradation, loneliness, increasing debt, longer working hours, and the purchase of unneeded things. It has resulted in some conservative evangelical ministers joining with liberal secularists in an anti-buying campaign as a way to work for change together. It is clear that actions must be taken to combat the new American character flaw — The Urge to Splurge.

Filmmaker John de Graaf and company have put together a stellar, snappy, and stimulating volume on "beating the affluenza bug." Sections on Symptoms, Causes, and Treatment cover many practical suggestions for addressing the problem and getting healthy again. This paperback is a dazzling and enlightening work of cultural criticism. 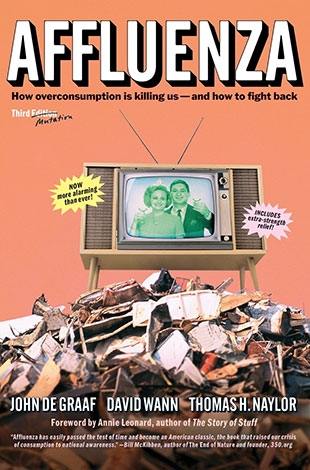