Forrest G. Wood, professor of history at California State University, Bakersfield, contends in this hard-hitting indictment that Christianity has been "fundamentally racist in its ideology, organization and practice." From his opening passages about religious indoctrination of children to his closing remarks about economic repression and public indifference towards black and brown people during Protestantism's "Halcyon Years," the author lays out with ample scholarly evidence an alarming history of justification for subjugating ethnic minorities.

Using illustrative material from sermons, doctrinal statements, and religious periodicals, he reveals the racial bigotry behind the missionary effort to obliterate the offending customs and culture of African blacks. The institution of slavery was often backed by Scriptural passages and a firm belief in "Christian imperialism." Wood not only attacks the virulent hatred of African-Americans but attacks fundamentalists for perpetuating racism in America. Equally chilling is Wood's analysis of mainline Protestant and Catholic churches ignoring of the race issue. He closes with a scathingly insightful quote from sociologist and civil-rights activist W.E.B. Du Bois:

"Never before in the modern age has a great and civilized folk threatened to adopt so cowardly a creed in the treatment of is fellow-citizens, born and bred on its soil. Stripped of verbose subterfuge and its naked nastiness, the new American creed says: fear to let black men even try to rise lest they become the equals of the white. And in this land that professes to follow Jesus Christ. The blasphemy of such a course is only matched by its cowardice." 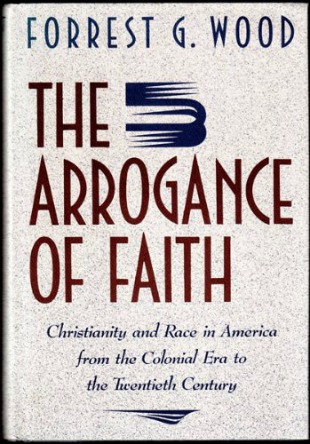