Lulu is a Rhinoceros

By Jason Flom, Allison Flom
A winsome story about a bulldog who cannot seem to convince others of her true identity.

Many of us have moments when we question our real identity or, further still, strongly contend that we are made a certain way even if others can't see it. The fanciful and funny book Lulu is a Rhinoceros hinges on this contrast of perceptions. When Lulu looks in the mirror, she beholds not her bulldog self but the cheerful and horned face of a rhino. She can get by with telling others, sometimes forcefully, that she's not whom she appears to be. But what she craves and cannot live without is that special horn.

Lulu tries an ice-cream cone on her snout (brain freeze!), a sock (stinky), a street cone (immersive). The banana peel she tries only makes others laugh at her. Even worse, a pigeon carries it off, leading Lulu to follow in hot pursuit across town to the gates of — you guessed it — the zoo. From that moment forward, her life only gets better.

Jason and his daughter Allison Flom give Lulu enough spunk that we don't so much worry about her as root for her, and in the end our hopes are rewarded. Sophie Corrigan's flair for illustrations gives the story the engrossing pleasure of a comic book, complete with speech bubbles and pictures for every new moment and line — and even some without text, like the giraffes watching in amazement as Lulu zips by with no one holding her leash.

This book makes no pretense about trying to help people solve identity crises. That's what makes it so appealing. It just makes us laugh and remember that we're never quite what we appear to be. But with a little kindness and understanding from those around us, we can find a place where we belong, and then everything else falls into place.

Sales of the book benefit the African Wildlife Foundation (AWF), where Jason Flom serves as a council member. The foundation — among its many projects — fights poaching of rhinos in Africa and runs a campaign to raise awareness of the threat to rhino survival caused by untruths about rhino horns' healing powers. Lulu, who is Jason and Allison's real dog, heartily approves of the AWF's efforts. 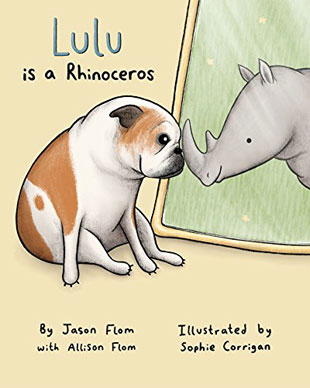