By Scott Russell Sanders
An introduction, through a father-son walk, to some of the most common species in a climax hardwood forest.

This is a book for nature lovers and for those who want to help their children get acquainted with trees through their bark, leaves, seeds, and fruit. A boy named Scott narrates the story about taking a break from his woodshop project with his father to stroll into the woods together, where they never hurry. "Trees don't rush about," the father says, "so why should we?"

As they go, they study the flora and fauna, realistically illustrated and helpfully labeled by Robert Hynes, an illustrator for the National Park Service and Smithsonian Institution. They play a game where the father asks, "Do you see any beech trees?" and Scott searches until he finds one, describing it to readers (it has "smooth gray bark like the skin of a hippo"). The boy tells us about each kind of tree they've discovered through this game, and we get to follow along with pictures that serve as identification aids. The sensory clues in the text are more than just visual; for instance, the green fruit on Black Walnut is "bumpy and hard, and it left on my fingers the sharp clean smell of soap."

While this book would be valuable solely for its way of introducing young readers to trees, its intergenerational aspect is also endearing. Scott and his father clearly spend lots of unhurried time together, and the father planted an oak sapling for his son before he was born because "he wanted me to have an oak for company." Early elementary school readers, ages 5 - 8, will get the most out of this book, but all ages can appreciate its emphasis on trees as beings who wish to meet and know us. 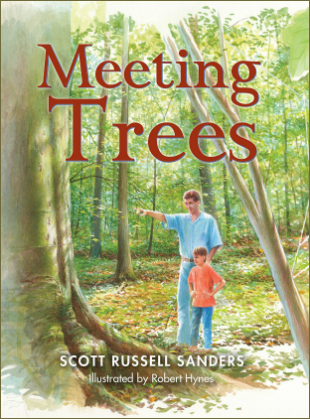