By Bibi Dumon Tak
Hard-to-answer questions from a Little Brother after the death of a family's beloved dog.

This story translated from the Dutch by Laura Watkinson starts by telling us that "there were dark clouds in the sky when Scout left" by breathing her very last breath over the edge of her basket. The dark clouds quickly turn to rain as the family carries out heartwrenching rituals of placing Scout's body on a blanket, carrying her outside, and digging a hole in the ground. They do not wait for the rain to stop.

This seems to be Little Brother's first experience of death, judging by his reactions. He keeps looking up at the stormy heavens and back down at Scout's body because "Scout was there, and Scout was here. She was in two places at once, and we were in between." (One could hardly say more succinctly how thin the veils between worlds are.) Little Brother covers Scout with his coat to protect her from the rain, in spite of his family asking why, and buries a ball with her, "In case she wants to play up there."

Little Brother asks persistent questions. They take the form not only of words but of illustrator Annenmarie van Haeringen's silhouettes of Scout surrounded by line drawings of things a dog loves: biscuits, turkey, cats, shoes, balls, fish bones, mail carriers, other dogs. Could Scout dig a hole up there? Little Brother wants to know. Can she run across the clouds? The family patiently tells him that they don't know, and continue to wrap him in love.

When the family wakes the next morning, the weather has changed. We are greeted by a surprise that calls into question any glib answers we may have been inclined towards as we listened to Little Brother's attempts to understand.

Warning: If you have ever lost a beloved pet and you read this story out loud, you are likely to be in tears by the end. Even so, it has moments of subtle humor — we can imagine the family's near exasperation as Little Brother chatters on and on — that make the tale endearing and not overly maudlin or sentimental. It's meant for children in Kindergarten through second grade — and of course for all of us who love animals and wish they could be with us forever. 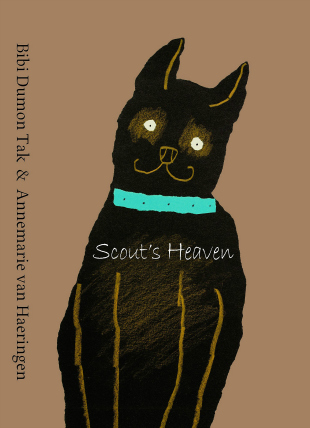