Look and Be Grateful

By Tomie dePaola
A board book primer on gratefulness practice by a beloved award-winning author and illustrator.

Thomas Anthony "Tomie" dePaola has written and illustrated more than 260 children's books, among them classics like Strega Nona, The Knight and the Dragon, and The Clown of God. In his more than 30 years of publication, he has received virtually every significant recognition in the children's book world, including Caldecott and Newberry Honor Awards and, in 2011, the Children's Literature Legacy Award for his lifetime contribution to American children's literature.

Given dePaola's long history, we are delighted and amazed that he's still sending light into the world through his inspired creations. Look and Be Grateful, originally published in 2015, is newly available in a sturdy board-book format. It reads like a young child's version of the "Grateful Day" text composed by Br. David Steindl-Rast, a Benedictine monk and author profiled in Spirituality & Practice's Living Spiritual Teachers project (see video below). Like Br. David, dePaola encourages children to open their eyes, look, and say "thank you" for simple yet profound pleasures like the sun, oranges, and ladybugs. Today is a gift, he tells us, showing a boy passing an orange to a younger girl who eagerly reaches out to receive it. Then they both bow their heads, place their palms together, and kneel to give thanks.

We wonder whether dePaola knows Br. David's work. That could easily be the case given dePaola's devotional life; he has even produced a depiction of St. Benedict holding the "Rule for Monasteries" that resides in the Abbey Church of Our Lady of Glastonbury in Hingham, Massachusetts. But it's also possible that truths about gratefulness simply ring through to saintly people in synchronistic ways. 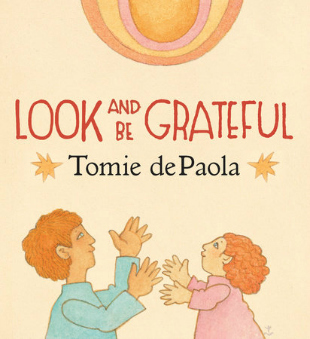