Stonewall A Building. An Uprising. A Revolution.

By Rob Sanders
A crucial moment in the history of LGBTQ+ rights told from the perspective of the Stonewall Inn.

This story is told literally from the inside out, by the Stonewall Inn as a building who welcomes all kinds of people under its roof and wants to share some extraordinary events. And the tale is inside out in another sense: Readers get a feel for the community within the walls of the inn; their story becomes our story so that when they spill out into the streets in protest, we are right there with them.

The Stonewall Inn, a sensitive narrator, understands that children may not even have heard this history, and respectfully begins way back when the inn was built to board horses in New York City's Greenwich Village. With horses whinnying and carriages rumbling on the cobblestones outside, depicted by Jamey Christoph's lively illustrations, we relive those early days.

When the wealthy residents who housed their horses move uptown, the neighborhood becomes a mecca for immigrants. As the Village changes, so do these stables, now joined together to form Bonnie's Stone Wall restaurant. The Inn tells us, "Greenwich Village was a place where you could be yourself, and where being different was welcome and accepted."

This hospitality continues through the Jazz and Beat eras leading up to the 1960s, when the Stonewall Inn's doors open and the neighborhood welcomes gays and lesbians — "men who loved men and women who loved women." Christoph's illustrations of people talking, strolling, and dancing light the pages . . . until we see a picture of a raid, with some of the Stonewall Inn's people loaded in the back of a police van, looking worried and sad. The Inn explains: "Loving someone like yourself was illegal."

At first people disperse into the darkness after the raids, quietly and angrily. But in the early morning hours of June 28, 1969, when police storm through the doors demanding IDs and arresting people, those who are not arrested stand defiantly in the street. A woman forced into a police car yells, "Why don't you do something?" and suddenly, all the suppressed anger bursts into shouts that become an uprising lasting for days.

The Inn proudly notes that this burgeoning LGBTQ+ rights movement "had begun here, inside our walls, at the Stonewall Inn." It goes on to tell of gay pride parades, changing laws, and other aspects of a movement that has come so far in celebrating equality.

We would be utterly sold on this book as a resource for anyone old enough to understand the words even if that tale ended it, but there's more. At the back of the book, a narrative history, archival photos, and an interview with Martin Boyce, a Stonewall Uprising participant and LGBTQ+ activist, draw us further into the experience; a glossary and further reading suggestions help with new vocabulary and concepts.

We as readers have heard from the inside perspective of the Stonewall Inn and become better informed. Now we feel solidarity with the community and want to get out and be part of this transformative movement. 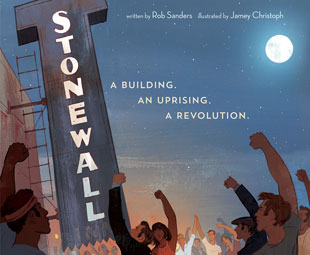