By Charlotte Agell
A book about the power of patient friendship to lessen our sorrows.

Elba, a charming but doleful pink hippo with eyes reminiscent of Tove Jansson's Moomintroll, sits all day on a dark block that she needs to laboriously drag whenever she wants to move, which isn't often. She keeps her umbrella handy in case it rains.

Along comes Norris, a bright green alligator always surrounded by butterflies. He dances rather than walks, even uphill. But Norris is not one of those insufferably cheerful sorts who make the gloomy feel gloomier. When he meets Elba, he offers a gentle question: "Do you want to go on a picnic?" When Elba says no, he asks what she wants to do, and she replies, "Sit here with my block" even though, as it turns out, she does not consider that to be fun.

As their questions and answers proceed, Norris observes that the block might be a box, and that he thinks that something inside wants to come out. Neither of them is sure how, so they sit quietly together until Norris says, "Maybe tomorrow," a sentiment Elba echoes.

This exquisitely sensitive approach to Elba's sadness continues until eventually, with Norris's help, the friends — plus the butterflies — are able to make it all the way to the ocean together. In one of the most moving sentences in this beautifully moving book, we learn that on their journey towards the beach Elba and Norris "talked and didn't talk." One would be hard put to say any better than that how sharing and silent understanding take turns in true friendship.

Page after page, Ana Ramirez Gonzalez's delightfully heartfelt pictures help carry this friendship forward. We won't spoil the ending, which had us in tears (the good kind), but as you might imagine, by the final page the block has grown considerably smaller. So, we imagine, will be the sadness of any child or grown-up who hears this story while depressed. What will grow larger will be the readers' ability to empathize and comfort others in need. A book that provides a service of such inestimable value deserves to be in every home, waiting room, and library. 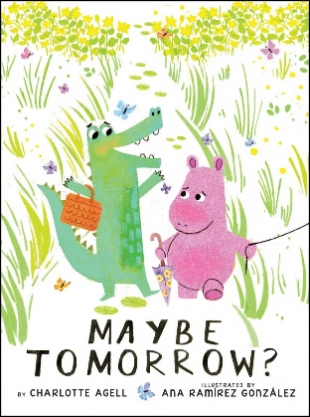