By David R. Loy
Essays calling us to do what we can to bring healing to the tormented earth.

David Loy began Zen practice in Hawaii with Yamada Koun and Robert Aitken and continued with Koun Roshi in Japan. Now in the States, he is a professor of Buddhist and comparative philosophy and a retreat and workshop leader. His previous books have explored the state of contemporary Buddhism in the West, Buddhist responses to the climate crisis, and overcoming cravings, delusion, and habit energies. We chose The World Is Made of Stories as one of the Best Spiritual Books of 2010 for its fascinating exploration of the formative role of stories in our lives.

Loy's commitment to socially engaged Buddhism is evident in his latest work. He offers wide-ranging perspectives on the many challenges facing humanity as we come face-to-face with the havoc wrought on the Earth by our greed, aggressiveness, and refusal to take care of the natural world.

Among the subjects he discusses are the interdependence of all things, the dehumanization that comes with addictions to consumerism and forward-thrusting materialism, the necessity to redo energy-inefficient houses, and putting an end to the vileness of factory farming with its horrific treatment of animals.

Loy proposes a new focus for Buddhism: Ecodharma, which includes both spiritual practice in the natural world and incorporating perspectives so gained to catalyze eco-activism. Always concrete and practical, he outlines "Sixteen Core Dharma Principles to Address Climate Change." He encourages people to take their meditation practice into the world on the "Ecosattva Path" (see the vow in the excerpt) offering liberation to all beings and the world itself.

Loy is in sync with the chorus of men and women who are doing their best to create a more harmonic world as a source of beauty and peace for all generations, including those to come. 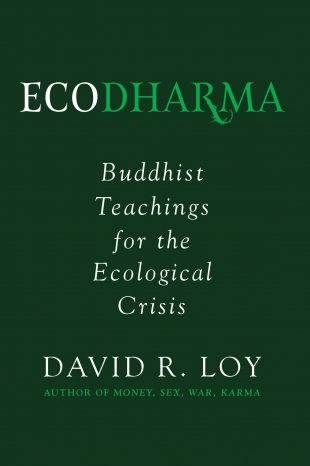