You Are Home An Ode to the National Parks

By Evan Turk
A poetic immersion in the sights, smells, and sounds of these cherished lands.

This is not, thank goodness, a straightforward guide to America's National Parks that announces, "Here you are in Yosemite ... ." Instead it immerses you in the sights, sounds, and smells of these cherished lands. You only notice as an afterthought, in small letters on the corners of pages, the name of the National Park into which you've been drawn.

This allows you to plunge fully into each park as a child would if guided by a wise adult who let the park speak for itself. Great Sand Dunes brings you:

"to the wildflowers
painting the
warming hillsides

"to the pronghorn
chewing the grass
of her first spring."

Shenandoah National Park invites you into the burrow of the chipmunk "sleeping beneath the leaves to keep warm," and Great Smoky Mountains National Park reveals "constellations of blinking fireflies."

These revelations of beauty throw open wide arms of cultural inclusion. Big Bend National Park — on the southern border of Texas — shows its awesome cliffs and river "to the child whose family has just left its first footprints on new shores." Ancient art on the cliffs of Mesa Verde National Park brings wonder "to the child whose ancestors lived on these lands before the stars and stripes took them as their own."

Evan Turk, an Ezra Jack Keats Book Award-winning author and illustrator, created the drawings with pastel on black paper that he always carries with him when hiking and exploring the parks. His soaring redwoods draw not only your eyes but your soul upwards; his sun-illumined Yosemite Falls is part of a four-page, unfolding spread that's a mystical experience.

Just as Turk took special pains to include some less famous National Parks like Biscayne (Florida) and Haleakala (Hawaii), so he makes sure to speak of the parks not only as cherished American monuments of nature preserved for public use but also as sacred places to Native Americans, from which they were "forcibly and violently removed" by the U.S. government. "I wanted this book to speak not just to those who already love the parks, but to anyone who has felt that 'for all' didn't include them."

As he weaves this tapestry of inclusion, Turk continually returns to the title refrain: "You are home." Home in a sense of belonging; home in the memories "carried through wind and rain, echoing in canyons carved way down deep in the heart of the earth and in our hearts alike."

Near the end he observes that:

"what keeps a home standing
can never be broken ..."

This is our wish for his book: that it will keep things from being broken by calling to hearts young and old to preserve the beauty he illustrates — and likewise to cherish the idea of a country that can "grow to become better than its beginnings." 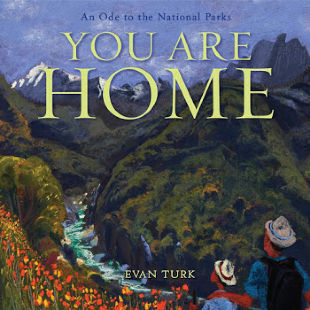