By Sarah Aronson
An improbable and inefficient chain reaction of a life that winds up making perfect sense.

Okay, we confess: Sometimes we get weary of the way the world seems to be going. At such times, it surely doesn't hurt to take a step back into creativity, fun, and whimsy, and that's exactly what Sarah Aronson and illustrator Robert Neubecker's Just Like Rube Goldberg allows young and old to do.

Aronson starts with a question: "How do you become a successful, award-winning artist and famous inventor without inventing anything at all?" She goes on to explain how Goldberg accomplished this feat, starting with his childhood love of drawing and his determination to become a great cartoonist for a big-time newspaper. Neubecker captures the shock and dismay on the faces of his family members when the boy announces his ambitions to his family, who have moved to the U.S. from Germany in hopes of a better life. Even the ancestor shown on a wall portrait looks disapproving!

Aronson and Neubecker go on having fun by snaking a description of Rube Goldberg's unhappy time with the San Francisco Department of Water and Sewers through a series of pipes. But a discerning reader can already see that Goldberg's interest in how things work — and how ridiculously complicated they can be — are influencing the future drawings for which he'll become famous.

It takes some time, and we get to witness an example of undaunted perseverance, but Goldberg eventually lands a job at the New York Evening Mail, where people can't wait for his cartoons about sports, politics, "and the silliness of everyday life." What they love most, though, are stories of his alter ego, Professor Lucifer Gorgonzola Butts, the eccentric professor who creates absurdly complex contraptions to accomplish simple tasks. For instance, his drawing of "how you put holes in doughnuts" includes a goat chewing a carrot, causing a sheet "ghost" to rise and scare a nesting bird into laying a head that falls on an archer's head, making him shoot his arrow into a bullseye that twangs backwards, activating a hand that pulls a string which causes a cannon to explode ... exactly as Professor Butts tosses a circular roll into the air above the canon. Voila! — a hole in the dough.

After carrying readers through this incredible life story embellished by outlandish inventions, Aronson reminds readers to be just like Rube Goldberg by working hard to achieve desired goals and having a great time getting there. A longer bio on the last two pages provides some fascinating additional details, like that Goldberg traveled to Paris four days after World War I broke out to observe "history at close range" and that in 1948 he was awarded the Pulitzer Prize for a cartoon called "Peace Today." It showed a house and a family atop a gigantic atomic bomb, "teetering between world control and world destruction." Hmm ... maybe Goldberg's sense of inventive humor had more to do with the way the world is going than this delightful volume initially lets on. 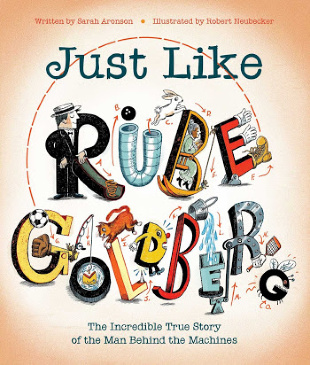