By Kwame Alexander
An ode to the resilience and accomplishments of African Americans.

New York Times bestselling author Kwame Alexander wrote this ode to African American resilience and achievement as a tribute to the birth of his second daughter, Samayah, and to the inauguration three months later of Barack Obama as President of the United States. It speaks powerfully and poetically of African Americans known and unknown to us:

"This is for the unforgettable.
The swift and sweet ones
who hurdled through history
and opened a world
of possible."

Kadir Nelson's illustration opposite these opening lines shows four-time Olympic gold medalist Jesse Owens (1913 - 1980) hurtling right off the page, symbolically beyond where anyone had gone before and into new future possibilities. But Alexander and Nelson are quick to follow that with a mention of those who survived "by any means necessary" and then, on a two-page spread which heart-wrenchingly has no illustration, "the ones who didn't."

And so the book lauds the undeniable, the unflappable, the unafraid, and more, even while also mentioning the unspeakable — three times in a row. On one spread we see people crammed into a slave ship; on the next, framed photos of the four girls killed in a racially motivated bombing in Birmingham, Alabama, in 1963; and finally a memorial of flowers, candles, photos, signs, flags, hearts, and gifts for Sandra Bland, Michael Brown, Tamir Rice, and Trayvon Martin, whose unjust deaths sparked outrage and protests worldwide.

Yet the book goes from there to Dr. Martin Luther King and "the unlimited, unstoppable ones." The rhythm of the words and pictures, from tragedy to triumph, captures Alexander's intent to write about what is left out of textbooks because "to truly know who we are as a country, we have to accept and embrace all of our woes and wonders."

Kadir Nelson is a two-time Caldecott Honor-winning illustrator, and his paintings of historical figures like artist Henry Ossawa Tanner (1859 - 1937), tennis player Serena Williams (1981 - ), and jazz pianist and composer Thelonious Monk (1917 - 1982) reflect strength, pride, and dedication. The histories of these and other people and events mentioned in The Undefeated appear at the back so that we have a reference point for any pictures that may be unfamiliar to us.

Alexander's ode doesn't end with the famous or even the unknown, but instead proclaims: "This is for the undefeated. This is for you. ..." The seven confident, joyous young faces portrayed here remind readers, in Alexander's words, to "never, ever give up" and "keep rising." 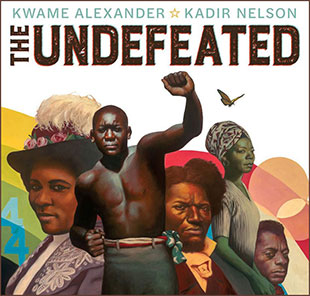