By Espen Dekko
A gentle tale of a dog, loved by a boy and now slowing down in old age.

A dog's lifespan is only a fraction of ours, so no wonder we cannot have too many books about how to part with our best friends. Like Bibi Dumon Tak's Scout's Heaven and Aaron Becker's A Stone for Sascha, Paws and Edward takes on the topic of love and loss with a sweetness that eases sorrow by entering into it wholeheartedly.

This story first greets us with a couple of dozen rabbits, whimsically drawn by Mari Kanstad Johnsen as they are chased by Paws in his dreams. He used to chase them for real, but now he's happier curled up beside his chum Edward, who's reading. Johnsen shows Paws with one eye opened a fraction of an inch, the way dogs do, not letting Edward out of his sight even while drifting in and out of sleep.

Edward still takes Paws on walks, even though Paws doesn't feel much need for them anymore, thinking only "Edward could use some fresh air." They go at an easy pace, and Paws likes running into people they know, which means he can rest.

Everything in this book speaks of togetherness. Edward tenderly and happily places his hat on Paws' head when they can't go on walks anymore, their mutual affection no less palpable than before. As Paws reaches the point where he's no longer even hungry or thirsty, he can feel Edward's heart beating and wonders why Edward's eyes are wet ... until Paws falls asleep, a sleep without dreams.

The next page spread, dark blue and black in contrast with the warm colors on previous pages, shows Edward face down on a park bench in a world without Paws, even though "Everything is there ... Even the rabbits." But then it is Edward's turn to dream, and he dreams of a happy Paws.

Perhaps you can tell already that I couldn't even finish this book review without going to find our two elder dogs and feel their hearts beat, a sure sign that even in its simplicity this book has the power to carry us somewhere deep. It will speak to children from preschool onward and to anyone who's ever loved an animal — especially a dog. 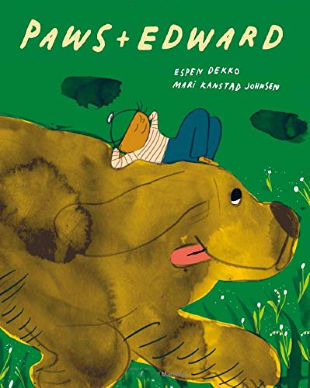