By Josephine Birch
A tale told entirely in pictures of a fisherman who saves a special seal and gets rescued by her in return.

Green, yellow, silver, and blue are the colors of shifting ocean waves, the colors of magical dreams, and the colors that Josephine Birch uses to draw us into this tale of a young fisherman. We see his ship dock one evening and him heading to "Mermaids Arms," an inn and the only words in the entire book. There he listens to one story after another: of a giant green fish swallowing a boat whole, a pirate marching a captive off the gang-plank, and more ... including legends of mermaids and selkies.

You've probably heard about selkies. They're mythical Scottish creatures who appear as seals while in the water but shed their skins to become human on land. Children needn't know this to understand the story, but it does add an element of wonder and yearning as the tale unspools.

The next day, out at sea again, the fisherman leans way overboard in distress over discovering a seal trapped in the large fishing net. He accidentally plunges overboard while trying to free her, and down they both go, still tangled in the net.

How their relationship forms as they tumble through the deeps and then rise again shows the gentle authenticity that Birch is able to create with only pencils and few colors. It's capped by the attentive yearning on the seal's face as she watches the ship depart once the fisherman finally returns to its safety. Never do the pictures stray from reality, but we know from the seal and the fisherman's underwater dance together and the book's title that this isn't any ordinary seal ... or are we led to notice that every seal is this special?

The publisher sees this book's audience as children ages 5 - 7. We suspect, though, that a teenager who loves the sea and its myths would be equally enthralled. Birch shares with us a timeless, ageless story of the love that can arise between humans and creatures of the wild — closer kin than we usually realize. 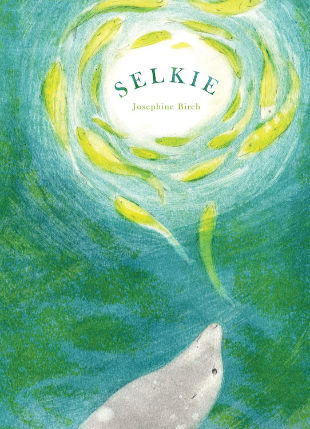