A Plan for Pops

By Heather Smith
A story of restored hope in a family where individual preferences matter.

A young boy named Lou gets to spend Saturdays with Grandad and Pops, who could hardly be more different from each other — nor more in tune with each other. When Grandad has toast with jam, Pops has colorful cereal. When Grandad reads the newspaper's science-and-technology section, Pops reads the comics. The two of them and Lou enjoy each other's company, and when they go to the library, they "walk hand in hand, like a chain of paper dolls."

We continue to see their differences couched in compatibility, and we get a gentle impression that Pops has been for some time becoming more childlike — for instance, when he puts spaghetti on waffles and adds hot sauce for zing. He's also the one who takes a nap in the afternoon while Grandad and Lou build a contraption, using the three Ps — perseverance, persistence, and patience. Brooke Kerrigan's charming illustrations reveal Grandad's indefatigability, as Lou collapses while the elder keeps working to resolve a problem.

They complete their Rube-Goldbergesque design, and when Pops wakes up, they surprise him with a flight of paper cranes, sent into the air with a box spring and kept aloft by a fan (plus plenty of other in-between props). Pops claps and exclaims, "I've never seen anything so beautiful."

But the following Saturday, Pops has a fall; after which they learn that he will always need to use a wheelchair. For weeks of Saturdays, he won't even come out of his room. How can Lou apply perseverance, persistence, and patience to bring back Pops' joie de vivre?

This book's uncommon celebration of two grandfathers in a loving relationship, deeply bonded with their grandson, carries hope on every level: hope for love, hope for renewal, hope for idiosyncratic solutions to sticky problems. It's one of those books that bursts out of its ages 3 - 5 range because of its tender, funny pictures and heartwarming storyline that speak to the best in humanity, at any age. 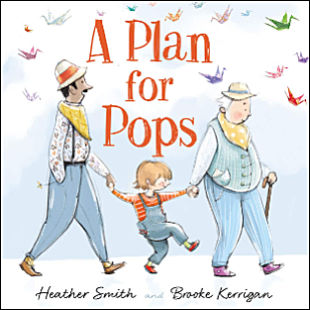