By Matthew Forsythe
A young frog's adventures with driving her parents nuts and musically rousing an entire forest full of animals.

Parents and children aren't always cut from the same cloth, and Pokko and her father and mother are examples of this. The grown-ups like to cook and read; Pokko tends toward the wild side. They give her a slingshot and she shoots herself from it; they give her a balloon and she floats off into the sky.

But their worst mistake is to give her a marching bass drum. They can't even hear each other over its constant booming. Her father suggests that she take it outside and play it quietly, because "we're just a little frog family that lives in a mushroom, and we don't like drawing attention to ourselves." Pokko obediently complies, but as soon as she's in the forest, she starts to drum louder in order to feel less lonely — and draws a steadily growing crowd of musically inclined animals.

Author and illustrator Michael Forsythe, a comic-book artist with many awards to his name, fills this story with humor. One of the "oops" gifts at the story's start is a llama, with whom Pokko all but manages to squash her parents: We see only their feet sticking out from beneath the shaggy reposing creature, Pokko astride his back. When animals start following Pokko through the forest to play instruments along with her or enjoy the music, one of them happens to be a wolf who makes a snack out of the rabbit in front of him. "No more eating band members," says our drumming heroine, "or you're out of the band."

Publisher's Weekly has added Pokko and the Drum to their list of Best Books of 2019. It's sure to entertain the four to eight year olds for whom it's meant and plenty of older sibs and caregivers along with them. 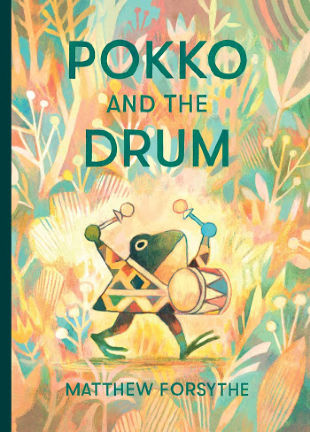