By Noam Chomsky
A fervent call to take the path of worldwide cooperation to avoid terminal disaster for the planet.

While reading "Talking Points" in This Week magazine (February 21, 2020), I came across this startling bit of information from The Washington Post:

That sure gives us pause!

Such developments are of concern to Noam Chomsky too. One of the most influential public intellectuals in the world, the founder of modern linguistics, he has written more than 100 books. Working with editors Charles Derber, Suren Moodliar and Paul Shannon, he ponders the apocalyptic possibility that either climate catastrophe or nuclear warfare could destroy nearly all species of life on the planet.

Chomsky's bleak analysis is set forward in two speeches. In the second, he also looks at "the hollowing out of democracy" as the third threat to the earth's sixth mass extinction that is already underway. There have been many signs of trouble with the growing circle of countries with nuclear weapons, the displacement of some 31.5 million people by floods and storms every year, the shortage of water in many hugely populated countries, and the global refugee crisis.

Chomsky points out that the Doomsday Clock, established in 1947 at the start of the nuclear age, was moved two years ago, three minutes closer to midnight (the point of terminal disaster). With the fervor of a preacher, Chomsky challenges readers to support all those who take the path of international cooperation to curb the nuclear threat. If there ever was a time that called for activism, it's now:

"For 70 years we've been living under the shadow of nuclear war. Those who have looked at the record can only be amazed that we've survived this far. Time after time, it's come extremely close to terminal disaster, even minutes away. It's kind of a miracle that we've survived. Miracles don't go on forever." 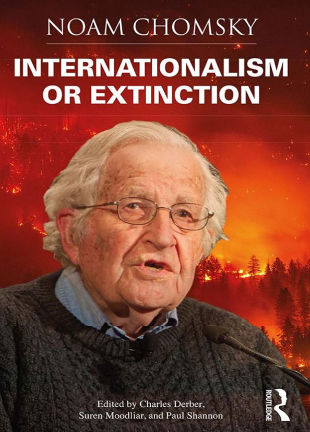