By Martha Seif Simpson
How a girl stands up against a bully in the spirit of Queen Esther.

Esther's Gragger echoes the story of Esther in the Bible. You may remember that as Queen of Persia, Esther kept her Jewish roots secret until she stood up for her people against anti-semitism through some artful negotiating with her husband, the king. The Jewish holiday of Purim celebrates her courage, creativity, and ultimately her success in countering plans to have all Jewish men, women, and children in the kingdom killed.

In this contemporary analogy for children, a young boy asks a shopkeeper to save a special holiday noisemaker — a gragger — for his sister Esther, who has been chosen to lead the Purim parade. Another boy demands that the shopkeeper give the gragger to him instead, but the man keeps his promise and saves it until Esther and her brother arrive. Esther and her brother stand up to the older boy when he tries to bully them into giving him this prized item, and a whole crowd of people join in to defend them against his meanness, using the noise of many graggers to scare him away.

It's not often that you get a toy shop, a brave girl, a caring brother, a powerful community outcry, a parade, and teachings about a religious holiday all rolled into one. Durga Yael Bernhard, who also illustrated Never Say a Mean Word Again, brings all these elements alive with festive illustrations reminiscent of the art of Tomie dePaola.

And that's not all: Esther's Gragger has pages at the end devoted to explaining what Purim is, how it is practiced today, what graggers are, and how to make your own noisemakers. You may find yourself, along with your favorite 4-8 year old, filling small containers with bells, pebbles, or dried beans and celebrating Purim by making some noise of your own! 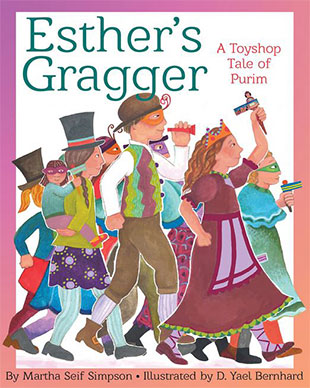