By Jacqueline Jules
A wonderful cross-cultural tale about the spiritual art of turning an enemy into a friend.

This edifying children's picture book is based on a story from the life of the Jewish poet Samuel Ha-Nagid (993-1056) who was the vizier (a royal advisor) in Muslim Spain. Writer Jacqueline Jules has taken this multicultural tale and made it into a touching parable about turning an enemy into a friend. The glorious illustrations of Durga Yael Bernhard give us a sense of medieval Spain.

In the opening scene, Samuel, a Jewish boy and son of the grand vizier, bumps into Hamza, a Muslim whose father is a tax collector. At the castle banquet, the two boys are seated next to each other. Again Samuel's clumsiness causes trouble; this time he spills food on the Muslim boy's white tunic. Hamza calls him a stupid donkey brain.

After talking to his father about the incident, Samuel realizes that he must do something to make sure Hamza never says a mean thing to him again. He imagines several possible scenarios including ones in which he restrains or humiliates his enemy. Instead, the two boys find out they have some things in common and start seeing each other regularly.

Never Say a Mean Word Again celebrates the art of making an enemy into a friend which in today's world of ethnic violence and hatred is a spiritual way to be encouraged. It is designed for children from ages 4 through 8. This book in the Wisdom Tales series includes an author's note about the legend behind the story and the cultural and religious richness of Samuel Ha-Nagid's time. 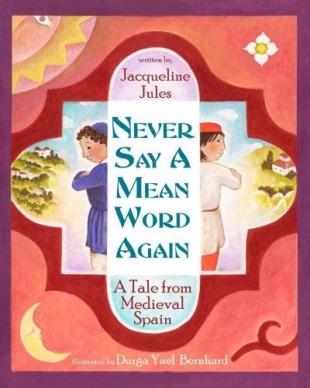