By Kristen Fulton
A story of courage, creativity, and resilience in the face of a repressive regime.

Six-year-old Peter Wetzel, living with his family in East Germany in 1979, has seen the newspaper clipping — illegal to have — of a hot-air balloon in far-away Albuquerque. He has been let in on the secret that his family is trying to escape the repressive East German regime with their close friends, the Strelzyks. He has promised not to tell about the picture.

Every night he falls asleep to the put-a-put-a-put of the sewing machine in the attic, but when he goes up in the morning to check out what happened, it looks exactly like it always does: nearly bare, with just an old sewing machine by the window. Then one day, his mama and papa wake him in the middle of the night to let him know it's time to go.

And what a harrowing trip! The two families manage to drive safely to a tree-surrounded field not far from the Berlin Wall, in perfect weather with thick clouds to hide them. But while they're still filling the balloon, they hear sirens and know that the police have spotted the rising dome of colors (patiently patched together for weeks because anyone buying large batches of nylon would be suspect). By the time Peter cuts through the rope holding them to earth, they can hear guard dogs barking and see a flashlight approach. Illustrator Torben Kuhlmann captures Peter's determination and his father's earnest concern with great empathy — and continues to do so as their drama goes on.

The events in this book, the publisher tells us, "are accurate to the best of anyone's ability to recall them given the passage of time and the intensity of that time period." Author Kristen Fulton tells readers in an Author's Note that she saw a short article in a 1979 copy of Time magazine about the Wetzel's and Strelzyks' escape and, wanting to know more, managed to track down Peter's father, Günter Wetzel, still living in Germany. As Fulton puts it, he has "risked it all, saved two families, and gave millions hope." She found him to be kind and generous, keeping his story quiet for years to protect his family and also their friends who remained in East Germany.

Written for 5 to 8 year olds, this book captures many of the character qualities needed in our time, too: courage, humility, creativity, resilience, and the ability to be a good friend. We cannot think of a single child who would not be fascinated by the Wetzels' adventure and, moreover, reminded by it to bring out the best in themselves. 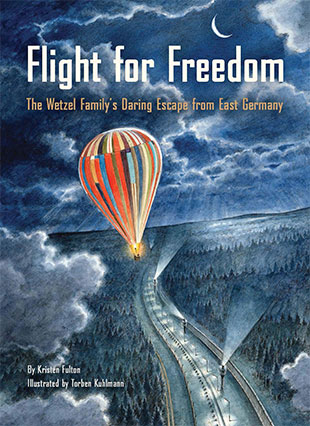