By Ben Gundersheimer
A beautifully illustrated bedtime tale that doubles as a poignant refugee story.

Almost any child, children's teacher, or caregiver has not only heard of Margaret Wise Brown's Goodnight Moon (1947), but can practically recite it by heart. Her soothing book with Clement Hurd's classic illustrations gently allows a child to grow sleepy by saying good night to all the things in the bedroom, from a bowl of mush to a picture of the cow jumping over the moon. It is subject to parodies, too, ranging from Goodnight Brew to Goodnight iPad.

Ben Gundersheimer's Lilah Tov Good Night, with comforting yet poignant illustrations by Noar Lee Naggan, is anything but a spoof, yet it manages to carry the same soothing quality as Margaret Wise Brown's bedtime story. We are greeted with the cheery words, "It's been a long and beautiful day," as we see a rustic peasants' farm with chickens splashing in water from an overturned barrel and a mother waving across the yard, bringing an adorable little girl in braided pigtails running for dinner. The fare is simple: soup, bread, an egg, tea, but the pictures give us an immediate sense of this small family's love: the mother cradling the baby in her arms as she eats; the father holding the egg in his palm as if it's the most precious thing on earth.

We soon understand the significance of the egg. As the sun sets and it becomes time to say good night (lilah tov) to everyone, the family has gotten bundled up, and they set out across their lawn, saying a good night to their chickens — which clearly the parents understand is actually goodbye. The father has carefully strapped the menorah that used to be on the windowsill to the simple bundle he carries, and he brings a few cherished books, too. The mother carries the baby on her back and takes time to tenderly tie the little girl's head scarf under her chin.

Now the rhyming lilah tov refrain begins, so reminiscent of Margaret Wise Brown's book, but in a setting of a refugee journey that makes the heart beat faster in longing and hope for this family's safety. The little girl is having a marvelous time saying good night to the bats in their caves and the beach and the waves, but meanwhile as adults we are seeing how the family takes an unpopulated route and then climbs into a small row boat to head further toward their final goal of a new and safer home.

By the time the menorah is ensconced in a new window somewhere far away and the little girl herself is tucked into a new bed, any young child listening will be wrapped in the story's loveliness. Any older child or adult will feel that age-old tug of profound appreciation for the strength of love amid the fragility of life. That Ben Gundersheimer dedicates the book to the memory of his grandparents, Herman and Frieda Gundersheimer, "refugees who crossed an ocean for a better life," adds immensely to its power. It's meant for anyone (though it's formally "preschool - kindergarten") and not to be missed. 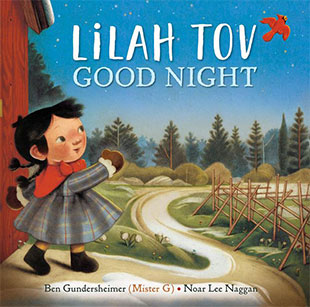