By Rohit Bhargava
The trend-curator's prognostications about the what's happening that will shape the future.

Leo Rosten tells a story about Destiny coming to an island centuries ago and summoning the inhabitants. "What would you do," he asks, "if I told you that this island will be completely inundated by an intense tidal wave?"

The first person answers, "I would eat, drink, carouse, and make love all night long." The second replies, "I would go to the sacred places and make sacrifices to the gods and pray without ceasing." And the third says, "I would assemble our wisest men and begin at once to study how to live under water."

The third person's grand-scale thinking has a certain appeal to public intellectuals such as Marshall McLuhan, Alvin Toffler, Buckminster Fuller, William Irwin Thompson, John Naisbitt, and other futurists of the twentieth century, but many scholars today are skeptical about the so-called "waves of the future," the somber predictions of global think tanks, or the expertise of post-modern wise men.

Yet given the American obsession with business and progress, there are some new contenders who have already made their mark on the scene. One of them is Rohit Bhargarva, founder and chief curator of the Non-Obvious Company. He specializes in trends, markets and future projections. We first became aware of him when he predicted in 2009 that in the near future, content on the Internet would double every 72 hours. That appears to have come true!

Bhargava describes his own style as similar to the mind set of science fiction writer Isaac Asimov: "I am not a speed reader, I am a speed understander." Put another way, this trend curator is an inveterate advocate of lifelong learning.

In this book, he presents ten trends which will characterize and impact the future of business. Here are a few of them:

It is interesting to see that even though Bhargava believes that "trends are profits waiting to happen," there are some values and visions in these prognostications about the future.

Bhargava generously offers free resources on his methods at www.nonobvious.com/megatrends/resources. 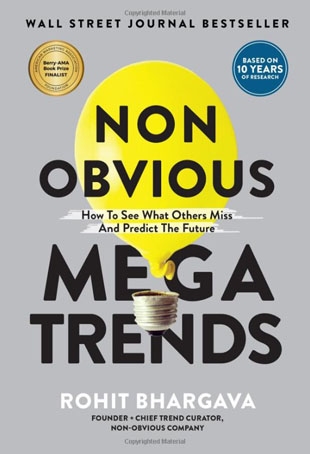