The Great Conversation Nature and the Care of the Soul

By Belden C. Lane
A radical call to listen and to love, to commune and to communicate to all the voices in the world of nature.

"We're surrounded by a world that talks, but we don't listen. We're part of a community engaged in a vast conversation, but we deny our role in it. We haven't the courage to acknowledge our desperate need for what we can't explain. The soul feeds on what takes us to the edge, but we don't go there willingly."

Belden C. Lane is Professor Emeritus of Theological Studies, American Religion, and History of Spirituality at Saint Louis University. We were immensely impressed with The Solace of Fierce Landscapes, a compelling account of desert and mountain imagery in the Christian apophatic tradition; it was S&P Book Award winner in 1998.

In this extraordinary book, Lane explores our human need for deep and meaningful connections with nature. He explains four essential ways to do this: (1) moving beyond exploitation, (2) yielding to fascination, (3) embracing awe and praise, and (4) seeking union. As an example of these approaches, he recounts his experiences communing and talking with "Grandfather," a 100-year-old cottonwood tree who is his spiritual guide.

In a series of poetic, anecdotal, and inspiring essays, Lane expands his perspective to encompass representatives of the elements: (1) air: birds, wind, trees; (2) fire: wildfire, stars, deserts; (3) water: rivers, canyons, islands; and (4) earth: mountains, caves, and wolves. These twelve teachers are enabling us "to value wild places — now that we're losing them" through climate change, species loss, and environmental destruction.

Lane brilliantly keeps expanding the circle with added adventures. Next, he matches twelve saints or sages to the nature teachers. They include a Sufi mystic, a Jewish rabbi, a Taoist philosopher, five Roman Catholic sisters and brothers, three Eastern Orthodox writers, and a Greek novelist who was declared a heretic (see the excerpt for a teaching story from him).

In what he calls "a shimmering landscape," Lane watches the mystery unfold:

"I'm haunted by the roguish language of the wild, by an evolutionary God who delights in endless transformations, a God of restless love revealed in predator and prey alike. Saying that everything belongs.

"I shoulder my pack and hit the trail, realizing I'm being called to a memory deeper than my own, to a language that my body has known all along. The desert speaks — out of lifetimes of patience and pain — with subtle but insistent voice. My role in the Great Conversation isn’t finally to understand, only to listen and love." This is a precious book for all nature lovers and also for those who after reading it, will be. 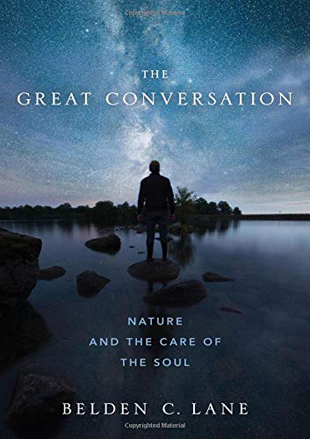