Literally Amazing Words and Where They Come From

By Patrick Skipworth
A multicultural journey through the surprising origins of 12 English words.

English is a lusciously multicultural language. Author Patrick Skipworth — who studied Classics and Linguistics in the U.K. and the Netherlands — has a penchant for word gems that carry rich layers of history, culture, and geography. With contagious enthusiasm he tells readers, "look closely and you will see that [words] are so much more than just ways to describe things."

In Literally, Skipworth gives us a smorgasbord of 12 special words with origins from around the world. Illustrator Nicholas Stevenson brings each vibrantly alive with engaging two-page spreads that capture both the original meaning and the current meaning of each word. You might think that "worm" would be rather boring to illustrate, but Stevenson draws on the ancient definition — "wriggling creature" — showing both the squiggles of earthworms and the twists and curves of a fire-breathing dragon. A calm, confident girl with glasses drinks in this scene at ground level.

A powerful sense of wonder comes through these pages. How did a word like "royalty" that originated in France gain such importance in England? How did the Persian word "mummy" jump from meaning "wax" to describing a preserved body? Whether it's caribou, safaris, or karaoke that Skipworth and Stevenson take on, they build such ample interest that readers may become eager to make a living of playing with words and their significance.

A map of language families around the world and an Author's Note round out this book and provide plenty of food for thoughts for grown-ups, too. It's meant for readers ages 6 -11, but the illustrations make it also suitable to explore with anyone old enough not to want to eat (literally) the delicious pages. 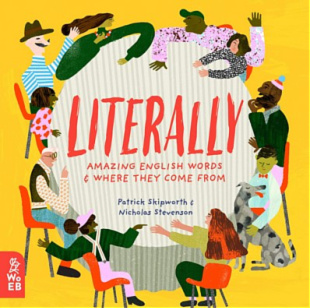 Purchase from What on Earth Books