Much has been written about Maria Martinez, the Pueblo artist who — together with her husband Julian and other family members — created internationally known black-ware pottery in the 20th century. Shaped by Her Hands is the first book to introduce her to a younger audience.

One of the authors, Barbara Gonzalez, is the eldest great-grandchild of Maria and Julian. The co-author, Anna Harber Freeman, grew up hearing stories about Maria's famous pottery from her grandmother, a collector of Native American Indian art. Freeman, an art teacher, had a hard time finding resources about Maria to use with children and was delighted to connect with Gonzalez to bring this woman's story to light for readers ages four to nine.

Surrounded by clay in the Pueblo lands of her childhood, Maria tried making bowls, but to her dismay they cracked and broke in the sun. She visited her aunt Nicolasa, a potter, for guidance, and the two worked together, making pots to store seeds and grain, allowing their Tewa traditions to live on.

As Maria's confidence grew and she continued making pots, she began to gain a reputation. But it was when an archaeologist, Edgar Lee Hewett, brought her a black pottery shard and asked whether she could recreate this special, fine polish, that her career took off.

The authors weave prayer and thanksgiving into story, for the Tewa people blend rituals of spirit with their lives and work. And illustrator Aphelandra, a descendant of the Oneida Nation of Wisconsin, has done a magnificent job of bringing warmth to the story with the turquoise, ocher, and gold colors of the Southwest and the loving gazes of family members sharing this creative work. 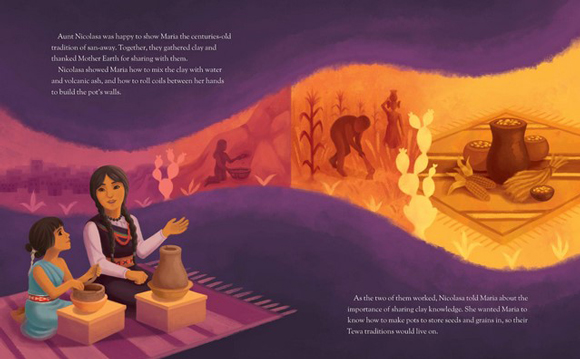 Shaped by Her Hands concludes with special notes telling more about Maria, the Tewa people, and San Ildefonso Pueblo, where she lived. The authors also provide a selection of books for further exploration. 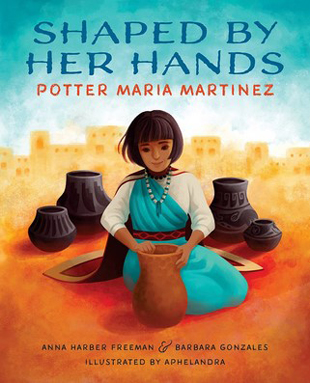