By Deborah Freedman
A gateway between present and past that shows their intimate connection.

Imagine if you could wrap awe-inspired art, mystical insight, lyrical language, and a philosophy of time all into one book. What would you have? Quite likely author and illustrator Deborah Freedman's latest gem, Is Was.

As the title suggests, the book plays with the momentary shifts that form bridges between past and present. A child on a swing beneath a tall tree — like the picture adorning the book's cover — moves not only through space but also through time, from where they were to where they are. The sky appears blue, and the next thing you know, it's spilling down rain. Was ... is.

This pattern winds through nature in ways that Freedman captures with patience, artistry, and grace. A fox pokes his nose into the book on the lower left side of a two-page spread, while a bright yellow bird flies off the right. All Freedman needs to write is one word — "was" — and we recognize the connections: how this fox wanted the bird and crept near but somehow the bird heard, and now that attempt to get a meal is history.

Freedman's onomatopoeic use of the two words that star in this story is equally brilliant. A bee buzzing through sunflowers makes the sound "izzz wuzz." The gentle splash of raindrops says "is is is."

If her book were merely clever, we might close the pages and occasionally return. But Freedman has also woven mystery and magic into it. A bee approaches a spider web, and we wonder if he's headed for "was." The next picture shows us the web with a hole in it, and we are left to tell our own story. Did the bee get captured and eaten by the spider, who's sitting on the rock beneath? Or did he burst through and escape? The words leave the outcome entirely subject to interpretation: a simple "Quiet is."

The book even suggests that the Earth's heart beat comes through in the swish of the child's swing: "is was, is was, is was." This imagery — both visual and auditory — forms a mantra or koan that we can carry into our days, feeling how nothing lasts and yet everything renews.

Readers ages four to eight will find this book a delight. The book's simplicity makes it one that could also be shared by an older reader with a child younger than four, and its profound message means that we grown-ups will keep it in a prominent place to remind us of time flowing into timelessness. 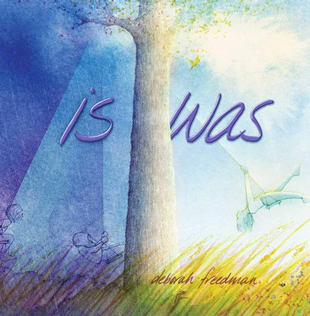