By Bashabi Fraser
The best introduction now available to this fascinating interreligious pioneer.

Rabindranath Tagore (1861 - 1941) was born in the century when Britain was dominant and died before seeing his country earn its independence. “His country” is not entirely clear, however, as he’s the only person who ever wrote the national anthems for two nations: Bangladesh and India. For a century or more Tagore has been embraced by people throughout the world.

He is known as the “Shakespeare of India” because his poems, songs, and stories are learned still by every schoolchild from Gujarat, bordering Pakistan on the Arabian Sea, to Kolkata, on the Bay of Bengal, Tagore’s birthplace.

He was also a novelist, playwright, musician, educator, social reformer, visual artist, philosopher, and the author of hundreds of short stories and morality tales. He was born into a wealthy Brahmin family that had nevertheless “compromised” its status by dining with Muslims. So he was born into privilege but also into social and religious reform. Fraser tells this story well, how Tagore used his novels, poems, and essays to express being “disturbed by the discriminations practiced by Hindu orthodoxy.”

Throughout his life Tagore maintained close friendships with Hindus, Buddhists, Sufis, Jains, Jews, and Christians. He was a pioneer of what we have come to call interreligious conversation and practice.

He was close friends with Mohandas Gandhi, but they also had disagreements. For instance, Tagore criticized the spiritualizing of Gandhi’s principle of satyagraha, writing: “Passive resistance is a force which is not, in itself, necessarily moral. It can be used against truth as well as for it.” But the title of “Mahatma” (meaning “great soul”) was bestowed upon Gandhi by Tagore.

He was an educator of children as well as a philosopher and painter, but we remember him most of all as a poet. His greatest work, Gitanjali (the word means “An Offering of Songs”), led to his worldwide fame. (See the excerpt that accompanies this review.)

In 1913, Tagore was the first non-European and person of color to win the Nobel Prize for Literature. This was a pivotal moment, opening western culture to the riches of the east.

Including an abundance of black-and-white illustrations, Fraser’s book is an excellent guide to Rabindranath Tagore and his impact. 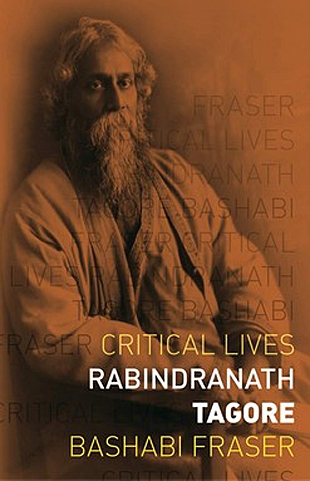