By Julie Flett
A celebration from an indigenous perspective of the kinship between children and animals.

Julie Flett is a Cree-Metis author, illustrator, and artist, whose children's books, often bilingual, have received critical acclaim, including the Governor General's Literary Award and the TD Canadian Children's Literature Award. Based in Vancouver, British Columbia, she advocates for indigenous youth and other community members and helps preserve and share indigenous languages among English-speaking populations.

We All Play, written for babies and young children up to age seven, brings us romping, splashing children in many shades of brown and their animal kin: bunnies hiding and hopping, foxes sniffing and sneaking, owls peeking and peeping, buffalo rumbling and rolling, and more. Flett's alliterative verbs for each species make the the pages pop with action, and in the interludes when human children return — to refrains like "We play too!" — she offers Cree translation as well (kimêtawânaw mîna).

Her illustrations, collage-like watercolors, are priceless. The yipping and yawning puppies make you want to reach through the pages to scratch them behind the ears, and the wiggling and wobbling bears gaze out from the page with such power of expression that you're sure they can actually see you. 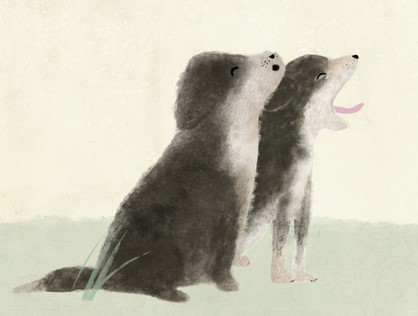 Flett wisely saves more extensive translation for a list of animals near the end of the book. The list gives the English — for instance, "beluga" — followed by Cree words for one beluga (wâpamêk), more than one (wâpamêkwak), and (our favorite) a "younger, smaller, cuter" beluga (wâpamêkos). She offers a guide to pronunciation and also lets readers know that audio pronunciations for all the words used in the book are available on the page for We All Play at greystonebooks.com. You can also see more of her illustrations there.

She closes the book with a message of unity about all of us, including animals, loving to play. "We are all connected, living in relationship and in care to one another, in kinship," she tells us. "In Cree, this is called wâhkôhtowin." She says she's happy to share this kinship "with you hoppers and wigglers and wobblers and wanderers — and wonderers." And we are grateful to feel this kinship with her and all creation in return. 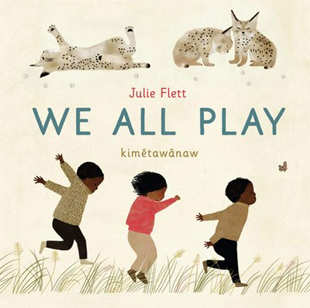