A Peacemaker for Warring Nations The Founding of the Iroquois League

By Joseph Bruchac
A centuries-old message of peace that's still alive with hope.

Joseph Bruchac, an enrolled member of the Nulhegan Abenaki Nation, is a world-renowned author of more than 170 books and is featured in our Living Spiritual Teacher Project. His numerous awards include a Rockefeller Humanities Fellowship, a National Endowment for the Arts Writing Fellowship for Poetry, and a Lifetime Achievement Award from the Native Writers' Circle of the Americas.

We are grateful that he writes for young people as well as adults. For this book, intended for 10 - 14 year olds, he worked together with illustrator David Kanietakeron Fadden, an Akwesasne Mohawk artist who runs the Six Nations Indian Museum in Onchiota, New York.

A Peacemaker for Warring Nations begins centuries ago when five of these nations — the Mohawk, Oneida, Onondaga, Cayuga, and Seneca — were at war with each other and with everyone around them. It tells of the miraculous birth of Two Currents, who came to be known as the Peacemaker.

Born with a strong sense of mission, the Peacemaker visited the war chiefs in each nation to speak about the need to end fighting and live righteously. In some cases, tribe members had had premonitions about him coming and helped him negotiate. In others, he navigated dangerous encounters by wisely and courageously understanding when to approach and when to wait.

He even invited one tribe to test him to see if his message was true, sitting on a tree branch that tribe members cut off so that he fell into a gorge and disappeared into the rapids! The war chief was sure that the Peacemaker would not return, but the next day, runners found him sitting at the edge of their territory, ready again to share his message.

The entire book carries such a strong sense of the Creator's message of peace that we frequently felt like we were reading Gospels from another culture. In the most moving passage, Ayenwatha — a follower of the Peacemaker who has recently lost three daughters he loved deeply — finds himself overwhelmed with such profound grief that he cannot carry out the instructions the Peacemaker had given him. When the two reunite, instead of chiding him for what he has not done, the Peacemaker says, "Ayenwatha, if anyone was as burdened by grief as you are, I would wipe the tears from their eyes with this fawn skin so that they could again see clearly." He does so, then deepens the ritual with further words of healing spoken while lifting, one after another, 14 strings of elderberries that Ayenwatha had made. From their meeting the Condolence Ceremony comes into being.

Tension in the story builds as the uniting tribes prepare to reach the Onondaga war chief, an evil magician, with a message of peace. Along the way, the Peacemaker reminds them about how to make sure each voice is heard, the importance of women's wisdom and leadership, and the need for a common language. How they resolve the conflict with the Onondaga chief is a model of psychological and spiritual acumen, as they heal him from the pain that caused him to be murderous.

The story ends by telling how the "new people from across the sea" drew from the wisdom of the Great League, the Iroquois Confederacy, that formed. Benjamin Franklin attended their meetings and adopted many of their ideas into what became American democracy.

Bruchac explains that despite three centuries of turmoil, the Great League still keeps their system of governance and their longhouse in Onondaga. They still tell the Peacemaker's story all around the world, "in the hopes that the message of the Peacemaker may still be heard, bring hope, and one sunny day be followed not just by their nations but by all humankind." May it be so. 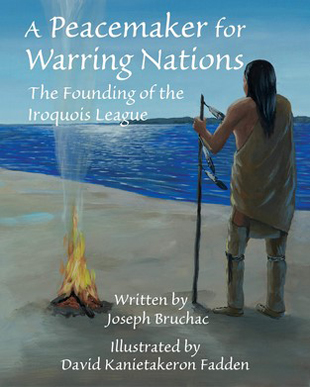