For many of us who followed pop music in the early 1970s, Cat Stevens' song "Peace Train" holds special sway in our yearnings and intentions for what could be. So it is a joy to bring the lyrics to a new generation through this children's book with jubilant illustrations by Peter H. Reynolds, whose acclaimed children’s book career includes the publication of more than 50 titles.

Cat Stevens, who was inducted into the Rock and Roll Hall of Fame in 2014, once told a concert audience that the song had come to him while he was riding on a train. You can hear a bit of the rhythm of the wheels on the tracks in its lines. It's a song — and now a book — full of hope, beginning with:

Now, I've been happy lately,
thinking about the good things to come,
and I believe it could be
something good has begun.

The accompanying picture shows us a young guitar player sitting barefoot on a hill, singing while a cat sleeps peacefully at his feet, a black bird sings overhead, and a white bird sings with him from atop his head. They look out over the landscape to a bright yellow train on the horizon. As the song/story continues and the train rides into closer view, we can see that peace symbols adorn many of its windows and psychedelic designs brighten the sides, an homage to the Flower Child idealism of the era when Cat Stevens wrote the song.

The Peace Train sounds louder, and everyone is invited to "come on the peace train." We see people of many nationalities, forms of dress, and degrees of physical ability joyfully approach, the young guitarist and his animal friends joining them.

When the lyrics ask, "Why must we go on hating?", the train comes to a full stop before a destroyed bridge, flames burning around twisted remnants of tracks. It is the musical notes that the guitarist and his friends sing that become a new bridge to ferry the peace train to the other side.

Born Steven Demetre Georgiou, the Grammy-nominated British singer-songwriter and multi-instrumentalist took the stage name Cat Stevens and later, when he converted to Islam, adopted the name Yusuf Islam. He is known worldwide for his hits: "If You Want to Sing Out, Sing Out," "Wild World," "Father and Son," and many more, "Peace Train" included. In 2020, Yusuf/Cat Stevens launched an initiative called Peace Train which delivers relief, medical aid, and education globally, helping bring to the world more of the happiness for which the song lyrics yearn.

The illustrations and format of this book lend themselves best to readers ages four to eight. But as the songwriter says in his introduction to the following video, in which he sings the story, "A peaceful world is a world we can all get on board with." 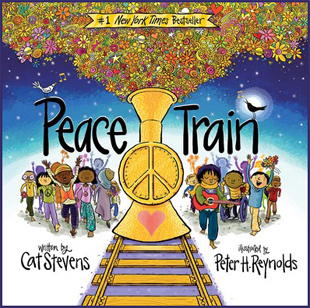