By Coleman Barks
Rumi’s translator finds similar spiritual abundance in the great Bengali poet and mystic of a century ago.

Gitanjali led directly to Rabindranath Tagore winning the Nobel Prize for Literature in 1913, the year the book was published. William Butler Yeats, one of the foremost poets of the 20th century, was among those in the West championing the mysticism and lyricism of Tagore in those years before the First World War changed the world forever.

Gitanjali means “song offerings” in Bengali, the original language of these poems. With help from a few friends, Tagore rendered them into English back before the War.

We’ve been reading and reviewing Coleman Barks with pleasure for thirty years now. This latest offering does not disappoint. Occasionally, we felt resonances not only with Rumi and Kabir and Hafiz, some of the usual mystic poets compared with Tagore, but also e. e. cummings, who was one of many poets who learned from Tagore’s use of language.

For example, the first poem of the 1913 Gitanjali famously begins, “Thou hast made me endless, such is thy pleasure.” It might feel Edwardian to some, or like the Authorized Version of the Bible, but it also, as a result, feels appropriately timeless. In the middle of that poem are these lines, written in prose-poem style: “At the immortal touch of thy hands my little heart loses its limits in joy and gives birth to utterance ineffable.” Beautiful. In Coleman Barks’s new rendition, these lines appear this way: “In your hands my heart loses the limits / of its joy. No containing that.” Also beautiful. More compact.

Then, the poem’s final lines, in Tagore’s original: “Thy infinite gifts come to me only on these very small hands of mine. Ages pass, and still thou pourest, and still there is room to fill.” In Coleman Barks’s version, what he earlier made more compact, now he more leisurely lingers upon: “Something is being said without using language. / Gifts come and keep coming / through these small hands.” And then: “Ages, still the pouring continues, / and there is somehow room / to hold the generosity.”

A nine-page introduction by Barks sets the stage for Tagore, his Gitanjali, and these new renderings of the poems. Barks compares Tagore to other classic poets such as William Wordsworth and Walt Whitman, but also Robert Hass and Franz Wright.

Everything Coleman Barks has done in this work shows, as he explains in the introduction, “There is a voice in these poems that is very at ease in its conversation with mystery.” 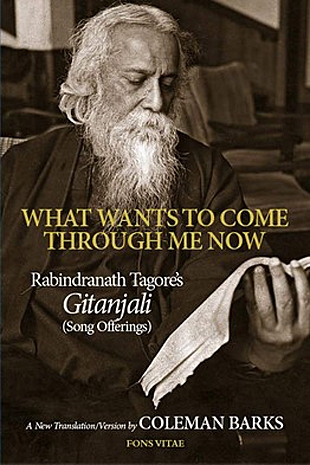