Words to Make a Friend A Story in Japanese and English

By Donna Jo Napoli
A playful demonstration of how friendship across languages and cultures can emerge.

One way to help heal fragmentation and lack of understanding in the world is to reach out to someone who speaks another language. If you are not yet learning their language, outreach requires trust in your shared humanity. It's all the better when that sharing involves play, as it does in Words to Make a Friend.

Wordlessly, a young girl looks out her window and sees another girl about her age playing in the newly falling snow. The first girl pulls boots out of a taped cardboard box — suggesting a recent move — dons her coat, and with her mother's help gets additional layers of scarf and hat. Naoko Stoop's illustrations, which add immeasurably to this story, exquisitely balance the distinct lines of door frames, mats and railings with bright primary-color winter wraps and, overall, the soft fluff of descending flakes. She shows the two girls meeting, one on each page, the book's binding literally separating them while their gazes connect.

And then the magic really begins. The first girl, packing a snowball, says hello; the newcomer answers "Konnichiwa." The first raises her arms in the air and excitedly shouts, "Let's play." She's answered by a big smile and "Asobou!"

We readers and observers are then treated to a wondrous selection of not-your-typical-Japanese-primer words, like "Tataite tataite" for "Push and mush" and "Botteri" for "Roly poly." Our favorite is when the Japanese-speaking girl transforms the snowman on which the two have been working; she adds scales, a scary slanted leaf eye, and sharp teeth and the two burst out laughing: "Godzilla." "Gojira." Throughout it all, they're working together in a friendly give-and-take that builds trust and assumes they have much in common — which they do.

Author Donna Jo Napoli attributes her fascination with getting beyond language barriers to her own childhood: "My grandparents came to the United States speaking Italian. One of them learned English and made friends with Americans easily, but three of them preferred not to use English and had only Italian friends." She points out that in the story the girls toss words back and forth in a way that allows the other to catch their meaning, and that "laughter is understood in any language." In the same vein, Naoko Stoop, who moved from Japan to Canada as an adult, writes in her illustrator's note that no matter how many words we do or do not know, "friendships start when we share something of ourselves with another person."

This book is for children four to eight years old and anyone who wants to enjoy the sheer delight it conveys. 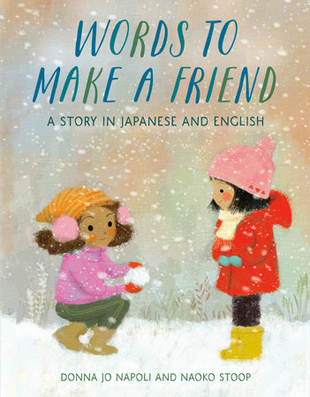