By Peter Mercurio
A tale of spontaneous compassion, tenderness, and amazing synchronicity.

Lives can completely change in a single instant, and every now and then such a change is so packed full of love as to be miraculous. In Our Subway Baby, Peter Mercurio tells a tale of spontaneous compassion, tenderness, and amazing synchronicity.

He narrates by sharing with his son the story of how he came into their family. Illustrator Leo Espinosa impeccably captures the ordinariness of the scene: On a cool August night in New York, Peter's partner Danny strolls through a tiled subway hall and exits. As he's mounting the stairs to ground level, he happens to glance at a bundle tucked into a corner. We see his eyes grow wide and his whole body pivot as he realizes that what had at first appeared to be a doll seems to be alive.

As Danny runs down and picks up the bundle, gazing into a baby's eyes, Peter tells of a gently moving connection:

"You were only a few hours old, wrapped up in a sweatshirt. Danny brushed your cheek. You wiggled your arms and legs."

Things speed up considerably then, as Danny calls Peter and shouts "I FOUND A BABY!" The picture of Peter sprinting toward 14 Street Station, eyes wide, bystanders looking on in puzzlement, is priceless.

This true tale takes many twists and turns from there, with one constant: Danny and Peter fall in love with this baby and cannot stop thinking about him, even when he's put into foster care without their being able to visit him. It's when a wise and compassionate judge steps in and expedites a process of adoption for these dads-to-be, that the story becomes fully miraculous ... because what could be more of a miracle than someone who recognizes and nurtures love?

The book concludes with an Author's Note with three photos of the family and updates about their lives. You'll be happy to hear that the judge who was instrumental in helping them become a family kept in touch, and "she's now become a part of our family outside the courtroom."

Four to eight year olds, for whom this story is written, will find it an exciting, love-filled page-turner. But it will not surprise us if you, too, read it with tears of joy and hope in your eyes. 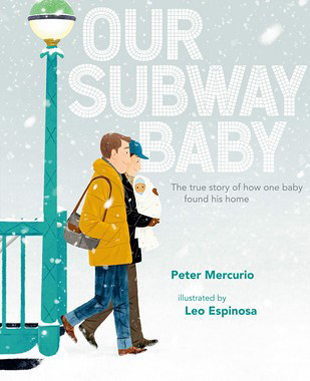