By Amanda Gorman
A soaring ode to inner and outer transformation.

Amanda Gorman is the first-ever U.S. youth poet laureate, best known for her soul-stirring reading of her poem "The Hill We Climb" at the 2021 Biden presidential inauguration. She is a committed advocate for the environment, racial equality, and gender justice, and her new children's book, Change Sings, reflects all three.

The lyrical story follows a young musician who "can hear change humming / in its loudest, proudest song." Page by page, she meets up with others different from herself, starting with a boy in a Jewish yarmulke and later including a boy who initially hates their music, a girl in a wheelchair, and more. New York Times bestselling illustrator Loren Long devotes months of thoughtful attention to each painting, whether it shows the children in front of a powerful mural of Dr. Martin Luther King, Jr., or scattered around an enormous chalk outline of the United States that someone has drawn on a basketball court, evoking feelings of regional as well as racial and cultural inclusion.

The illustrations reveal concrete ways of embodying a vision of change, such as picking up litter, offering food to refugees, and building a wheelchair ramp. Meanwhile, Gorman's words soar, as when she writes:

"Though some don't understand it,
Those windmills of mysteries,
I sing with all the planet,
And its hills of histories."

But she does not leave the change only out in the heavens or even in attending to what the world needs. Instead, she recognizes, "Change sings where? There! Inside me."

If the four-to-eight-year-old children in your life watched the inauguration with you, they may already be Amanda Gorman fans. But even if they're newly meeting her, they're sure to be inspired by her loving, prophetic voice and these bold, triumphant pictures. 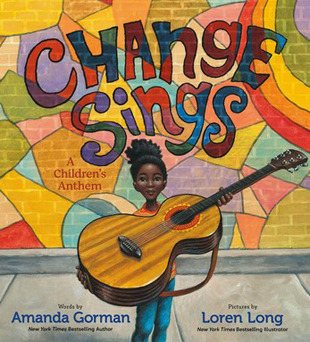