By Holly Gayley (editor)
An anthology illustrating ways in which monks and nuns are engaging modern social issues.

This is an anthology for a relatively small audience but a devoted one, dedicated to understanding the dharma (teaching) of Larung Gar, the largest and most influential monastic institution of Tibetan Buddhist learning on the Tibetan plateau. In English, “Gar” means roughly “Academy,” and Larung is a township in the Sichuan Province.

Three teachers in particular are highlighted: Khenpo Jigme Phuntsok (1933-2004), the founder of Larung Gar, and his two successors, Khenpo Tsultrim Lodro and Khenpo Sodargye. Together with many nuns also holding the scholarly title, Khenmo (the feminine version of Khenpo) — including Khenmo Rigzin Chodron — these teachers address monastic and scholastic topics such as tantric ritual, social issues including HIV/AIDS prevention, and specifically ethical reforms such as humane ways of treating animals in the care of Tibetan people.

The environment and climate change, as well as the defense of Buddhism against secular critics of the religion, make these rather scholarly chapters — each translated from the Tibetan — particularly relevant to the twenty-first century.

Chapter 1 introduces the approach taken at Larung Gar since its founding, which has been to revitalize Tibetan Buddhism after the Cultural Revolution of 1966-76. Subsequent chapters focus on the institution’s teachers and themes.

Holly Gayley, a professor of Buddhist studies at the University of Colorado-Boulder, explains in her editor’s introduction “four key features of the Buddhist path: a virtuous character, renunciation, bodhicitta (characterized by love and compassion), and nondual wisdom.” These are themes that one finds helpfully echoed throughout the book. 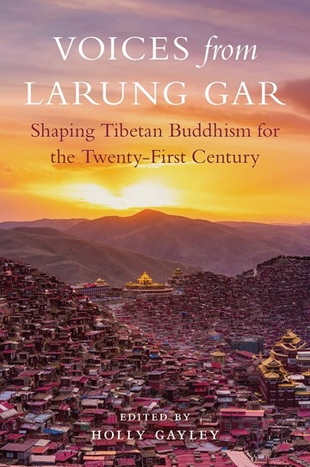