Maxims for Mutuality Principles for Catholic Theology, Education, and Preaching about Jews and Judaism

By Philip Cunningham
Willingness to see the mistakes of the past.

Religious traditions often begin as offshoots of other religious traditions. For instance, Buddhism grew out of Hinduism, and Christianity came from Judaism. As a result of their origins, there are often strains of teaching in the off-shooting traditions that strike a triumphant tone.

Christianity is full of these problems with regard to Judaism, and Philip Cunningham — a professor of theology at St. Joseph’s University in Philadelphia and director of their Institute for Jewish-Catholic relations — has spent a career trying to correct them. This little book does this succinctly in ways that should make it a helpful study tool for Christians (Catholics most of all) willing to be sensitized to how Catholic teaching and liturgy can be anti-Jewish.

Ten maxims form ten chapters, each with five to seven pages detailing a problem and offering solutions. They are wittily worded to resemble the Ten Commandments. Some of these ten may be grasped, even by the reader not accustomed to theological talk, simply in their chapter titles:

“You shall not suggest that Judaism and Christianity are opposing religions or engage in oppositional thinking about their relationship” (ch. 3).

“You shall not theologize about Jews or Judaism without first dialoging with Jewish interlocutors who do not share the Christian faith or without consulting texts written by Jews or by those who have direct experience of contemporary Judaism” (ch. 4).

“You shall be humble before the freedom of the One who covenants with both the people of Israel and the church and whose intentions for creation have yet to be fully realized” (ch. 6).

Excellent advice, all. Several times, Cunningham mentions how Pope Francis inspires him in addressing these problems, for instance, quoting the Pope who recently wrote: “dialogue and friendship with the children of Israel are part of the life of Jesus’ disciples.”

Maxims for Mutuality will be of most use to Christian readers familiar with Christian and Jewish theological language. Words such as ecclesial, peoplehood, halakhic, diaspora, Mishnah, postbiblical, and hermeneutical are important to grasp, to get the most out of what’s here, and they’re not always defined when used.

An illustration appears at the start of each chapter. These are reproductions of works of art, cartoons, icons, sculptures, or photographs, helping to show how ingrained the problems have been in Christian thought and practice for 2,000 years. 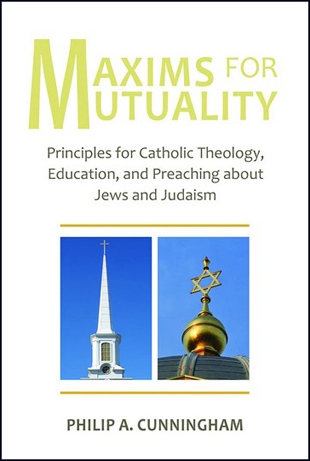