By Dimitris Xygalatas
Why we need ritual.

The author explains, “The special appeal of ritualization goes far beyond early childhood. It remains a key part of our lives that persists throughout development and well into adulthood, and is honed into the myriad ways in which human beings in every culture celebrate the most important moments of their personal and public lives.”

“In fact, ritual is one of the most predictable features of every human society,” the author adds. Then it dawns on the reader why it is that religion, which they might have happily left behind years ago, is occasionally looked upon wistfully. People still have major life stages, celebrations, and changes — and rituals help to mark those appropriately, adding meaning and purpose to the trajectory of our lives.

Xygalatas addresses all of the occasions when ritual is important: including the birth of a child, naming a child, and when a child is welcomed with adult responsibilities into a community (“coming-of-age” ceremonies). Then there are weddings. These ritual moments have similar markings across cultures, and Xygalatas, as both a trained anthropologist and cognitive scientist, is well-qualified to unpack them.

He then refers to “the ultimate major life transition,” death. Some of the rituals surrounding death will startle many readers, for instance, this from Indonesia: “The Toraja people … keep the bodies of their dead relatives in their homes for months or even years until they prepare an elaborate funeral for them. During that time the corpses dry and become mummified but the relatives treat them as if they were still living.”

Despite all the examples, this is not primarily a book of ritual examples, but an exploration of what ritual is and means in our lives. Humans are “the ritual species,” the author explains, and ritual is what connects us to each other, to our life partners, to our communities, and to the earth. This is why the examples include a wide range of experiences, such as a Japanese Buddhist temple offering “women a divorce ritual that consists in writing their grievances on a piece of paper and flushing it down the temple toilet,” and the costume-wearing and light displays at the annual Burning Man gathering in Nevada. (See the excerpt accompanying this review for a discussion of Burning Man.)

Names of some of the chapters offer clues as to the author’s answer to the question, What good is ritual? Chapter 3, “Order.” Chapter 4, “Glue.” Chapter 7, “Sacrifice.” Chapter 8, “Well-being.”

I’m writing this review in the days immediately following the death of Queen Elizabeth II of England, when it seems the world is captivated with an institution of a past age, without much relevance for today. Still, there are hundreds of millions of people watching the Queen’s coffin move across the Scottish and British countryside, toward her final burial, and the rituals of both state and church related to the ascendancy of a new monarch. These are all strong evidences that, despite what many of us might profess at times, ritual still matters, perhaps in ways we cannot express. 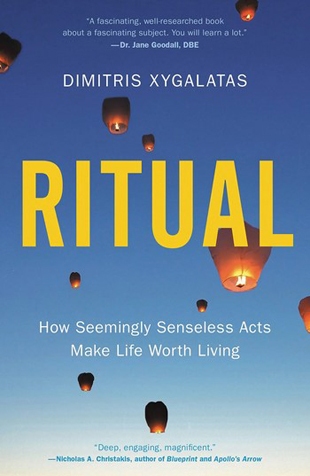