Gently Down This Dream Notes on My Departure

By Hugh Prather, Gayle Prather
Final wisdom from one of our great teachers.

We have been reviewing Hugh Prather’s books for decades. Notes to Myself (1970) sold well over five million copies, and was followed up by Spiritual Notes to Myself (1998), among others. Hugh died in 2010; he’s an important member of our “Remembering Spiritual Masters Project.”

This book was his last manuscript, left unpublished when he died. His widow and co-author, Gayle, tells in a note to the reader how she sent it to one publisher who “very politely rejected it,” and then she didn’t pursue the matter further. Then, during the pandemic, an agent contacted her to say how much he loved Hugh’s work and asked if Hugh had written anything that never saw print.

This book is like his others in that it is episodic, inspirational, loving, and deeply personal. Prather has a knack for getting your attention by starting a teaching with a sentence that seems incorrect — for instance: “We are always practicing the Golden Rule.” It goes on, and we quickly learn something new: “Or at least the principle behind the rule: What we do to others, we do to ourselves. If we treat another destructively, we cannot escape being destructive to ourselves.”

And here is one more of these great teachings that begins with a sentence that seems wrong. It’s titled “Greed”: “Extend grace to those who are greedy. They are not jeopardizing their afterlife but rather their knowledge of the kingdom of heaven within them now.”

The book is divided into these spiritual vignettes. The longest is five pages long. The shortest is a single sentence.

Occasionally, the vignettes or anecdotes reveal the authors' humility and show the reader the ordinariness of spiritual encounters. One of these that we particularly loved is called “Mother’s Day and the Golden Rule.” It is too long to quote here. You need to read it. Hugh Prather is, thank God, still with us. 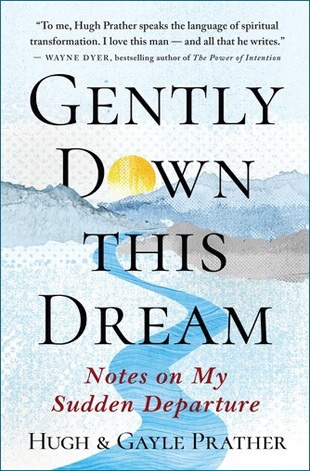