The Illumined Heart The Ancient Christian Path of Transformation

By Frederica Mathewes-Green
Explores the spiritual practices of the early church.

Frederica Mathewes-Green, author of Facing East: A Pilgrim's Journey into the Mystery of Orthodoxy and At the Corner of East and Now: A Modern Life in Ancient Christian Orthodoxy, takes us on a journey into the Middle East during the fifth or sixth century where Anna, a Christian, spends most of her time pursuing divine union. The religious term for this is "theosis," which the author defines as "one's essential being is permeated and filled with the presence of God." For Anna and other members of the early Christian community, the spiritual disciplines of prayer, fasting, and almsgiving were steps on the path toward a totally transformed life in Christ.

Mathewes-Green believes that contemporary believers could learn from the ancient church where authority was diffused among everyone and where hearing the Holy Spirit's voice was something honored and taken seriously. The author emphasizes that the battle between Christ and the Evil One was "the backdrop of every believer's journey to theosis." She also notes the importance of repentance, the Jesus Prayer, and the preeminent belief in God's unceasing mercy. 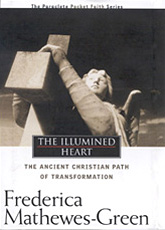