Towers of Hope Stories to Help Us Heal

By Joy Carol
Expands the horizons of our understanding of healing, providing good medicine for our souls in these times of anxiety and insecurity.

“Who is a holy person?” the poet Kabir asks. “The one who is aware of others’ suffering.” All of the world’s religions advise us to be sensitive to the troubles of others. To be oblivious to the suffering of our neighbors is to be locked up in a tower of isolation and pride.

In Towers of Hope: Stories to Help Us Heal, Joy Carol presents a spiritual alternative: to learn from those who have passed through the fires of adversity and come out with a renewed appreciation for the preciousness of life. The author, a spiritual director and workshop leader, who had three close encounters with death in three years, has gathered a heart-affecting and edifying collection of stories about individuals who transformed what appeared to be hopeless situations into healing experiences. She shares the personal accounts, mostly in their own words, of how these broken and hurting souls moved from their losses and disabilities toward hope, meaning, and wholeness. In the apt words of Frederick Buechner, these people were “good stewards” of their difficulties and pain.

Carol begins with the stories of a young man who died in the World Trade Center disaster and the account of a courageous man who was cured of his severe case of shingles while helping the victims. Some of the other inspiring narratives are by a Vietnam vet who has experienced healing by working with both Americans and Vietnamese injured by the war; a woman traumatized by the troubles in Northern Ireland who found meaning in forgiveness; a Native American medicine man in Canada who has a knack for finding wisdom in his trials and tribulations; a “so-called colored” couple damaged by apartheid in South Africa whose faith in God pulled them through; a wealthy businessman whose bad choice of drinking and driving one night killed a young man and who came to terms with his strengths and weaknesses while serving time in prison; a victim of multiple sclerosis and her husband who optimistically reframed their adversities; and a woman whose courage in the face of terminal illness inspired all who came in contact with her. The last account is Carol's own about her close encounters with death and the epiphanies she received about "healing for meaningful living and for peaceful dying."

The author expands the horizons of our understanding of healing with these stories, helping us to see it as becoming whole, being open to change, reconnecting lost aspects of ourselves, being empowered by the Divine, having faith and hope, finding inner peace, forgiving ourselves and others, and discovering love. Towers of Hope: Stories to Help Us Heal by Joy Carol is good medicine for your soul, especially in these times of anxiety and insecurity. 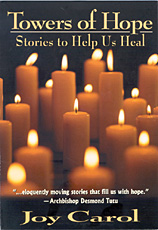