The Green Man Spirit of Nature

By John Matthews
A gift box with a plaque and book celebrating the representative of the natural world who reflects our ties to the earth.

The Green Man: Spirit of Nature by John Matthews is gift box with a plaque and book celebrating the representative of the natural world who reflects our ties to the earth.

This delightful gift box consists of a Green Man plaque designed for use in the garden, patio, home, or office along with a beautifully illustrated book on this unofficial icon of the environmental movement. John Matthews has studied the Celtic tradition for 30 years and is the author of many books on the subject. In this handy little volume he presents a brief history of the popular myths and legends surrounding the Green Man, an ancient symbol of nature and fertility.

There are intimations of his presence in the Sumerian epic of Gilgamesh, the Norse cult of Odin, the oak groves of the Celtic world, the Egyptian tales of Osiris, and the phantasmagorical adventures of Pan and Dionysius. In Arabic culture, green is the color of rebirth and resurrection and the spiritual color of Islam.

Over the ages, the Green Man has been called many names including Puck, the Green Knight, Pan, Robin Hood, and the Jolly Green Giant. Matthews suggests a number of ways this representative of the natural world can be invoked in your home and daily life. For example, after noting that those confined to bed often feel disconnected from nature, he suggests placing a Green Man in a sick room to remind patients that "the green round of nature goes on, even though they may be far from its touch." He gives some ideas on using the Green Man in rituals and ceremonies. Finally, Matthews lists places around the world where the Green Man can be seen in carvings and other incarnations. 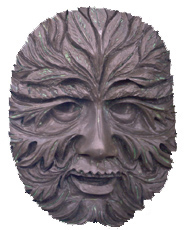