One Dharma The Emerging Western Buddhism

By Joseph Goldstein
Elucidates in many profound and dramatic ways the essential wisdom of this tradition that has become so popular in North America.

Joseph Goldstein is cofounder of the Insight Meditation Society in Barre, Masachusetts, where he is one of the resident guiding teachers. He is the author of The Experience of Insight and Insight Meditation and has coauthored books with Sharon Salzberg and Jack Kornfield. Goldstein has studied and practiced meditation since 1967 under the guidance of eminent teachers from India, Burma, and Tibet. He lectures and gives retreats around the world.

There is a Tibetan saying: Every valley has a different language and every teacher has a different Dharma. Certainly this is the case in the West where Buddhists have the opportunity to study and practice with many different teachers from a variety of traditions. Goldstein is convinced that all students can find “skillful means” — the best methods and practices for freeing their minds from the bonds of ignorance, taking into account temperament, background, and capabilities. As he puts it, "For some the language of emptiness may be dry as the desert, while for others it may reveal the heart-essence of liberation." In American culture where everything becomes fodder for the engines of consumption, even Buddhist themes are up-for-grabs. Goldstein describes an automobile advertisement that has an attractive couple standing in front of a new car surrounded by all the latest goodies. The caption reads: “To become one with everything, you need one of everything.”

After briefly examining the history of Buddhism, the author explores some of its major lineaments with chapters on the awakening of faith, doing no harm, acting for the good, purifying the mind, lovingkindness, compassion, liberation through nonclinging, and nirvana. Goldstein concludes that in the One Dharma of emerging Western Buddhism, the method is mindfulness, the expression is compassion, and the essence is wisdom.

One of the many marvels in the work of this experienced teacher is the wealth of illustrative material he uses to articulate the message of the Buddha. Here is one example: "Sense pleasures, views and opinions, the notion of the self — these are the arenas of grasping that seduce us again and again. As we go deeper in practice, nonclinging has increasingly far-reaching implications. It touches the depths of what binds and limits us, and brings us to the edge of what we are wliling to let go of in our lives. The teaching 'On the Faith Mind' by the Third Zen Ancestor, Seng-Ts'an, reminds us, ‘The Great Way is not difficult for those who have no preferences. When attachment and aversion are both gone, the Way is clear and undisguised.' " The practice of nonclinging is a good defense against all the feelings that rush to the surface in our daily skirmishes with what Buddha called the eight great vicissitudes of life: pleasure and pain, gain and loss, praise and blame, fame and disrepute.

Here’s another bit of wisdom. Bankei, a seventeenth century Japanese Zen master, said simply: “Don’t side with yourself.” This, too, is part and parcel of One Dharma. It enables us to practice selflessness which the author calls "the great liberating jewel of Buddha's enlightenment." 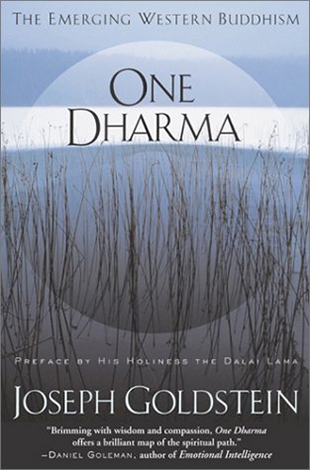