By Joseph Bruchac
Colorful anecdotes and a stirring and salutary overview of this way of life.

Joseph Bruchac is a nationally known Native American storyteller and author of more than 70 books including Keepers of the Earth. He is founder of the Greenfield Review and lives in upstate New York.

In this succinct and very readable overview of Native American history, culture, and values, Bruchac makes it clear that Native America consists of many cultures and it is foolish to generalize or to fall into the trap of seeing all Indians alike. The organizing principle of this volume is the important role of storytelling in these communities; it is as central to their life as shelter, hunting, and ceremonies. Elders pass on every aspect of their world to the younger generations through stories. Here is one:

"Trickster tried to stop them, but his hands would not listen. They began to struggle over that piece of meat. They tugged back and forth. Finally his hands got so angry that they attacked each other with knives. The scars from that fight can be seen as the lines on every person's palms."

That's a good description of the greed that consistently causes us to try and put our needs above those of others. Such a teaching is best conveyed by a story.

Bruchac also discusses the coming of the Europeans and their impact on the lives of Native Americans; the importance of the generations; the close relationship with the earth, animals, and plants; and Native attitudes toward life and death. One of the central aspects of Native American spirituality is the circle. Bruchac sums it up in this thoughtful passage:

"The predominant world view shared by the majority of American Indian nations is that of the circularity of existence. It is a universe in which, as Black Elk put it, 'the Power of the world always works in a circle and everything tries to be round.' The cycle of the seasons, the circling of the sun and moon, even the round shapes of the nests of birds, are evidence of this. Just as every point on a circle is equal to every other point, no place being closer to the center than any other, all created things are regarded as being of equal importance. All things — not only humans and animals and plants, but even the winds, the waters, fire, and the stones — are living and sentient. Further, just as the strands of a spider web are so interconnected that touching one makes all the others tremble, in that circular universe everything is connected to everything else."

Native American wisdom provides a lens through which we can see clearly the interconnectedness of everything in the universe. We also were quite taken with Bruchac's discussion of the importance of "the eye of the heart" in many Native American tribes. Our Stories Remember is filled with colorful anecdotes and a stirring and salutary overview of this way of life. 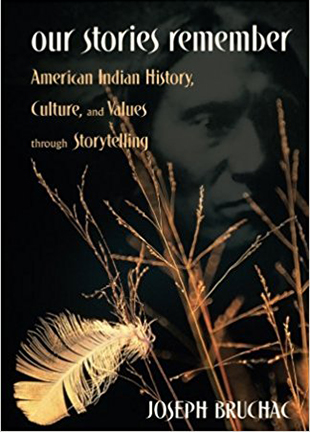