By Ted Kooser
A book of prose that moves through a Nebraska year and finds wonders all around.

A memoir recommended for those wanting to learn how to be a connoisseur of the commonplace and practice wonder every day.

One of our favorite scenes in the movie Smoke is when Auggie shows Paul the albums containing some of the 4,000 pictures he has taken of his cigar store from across the street. When his friend complains that all the photos are the same, Auggie points out that although they are of the same spot, they are remarkably different from day to day. One of them even contains something important for Paul to see. Blessings are right in front of us, and some of the best spiritual journeys are the ones we take in our own neighborhoods.

Ted Kooser is a visiting professor of English at the University of Nebraska and a retired insurance executive. His poetry has appeared in nine special collections and eight books. In this book of prose, he proves to be a gifted connoisseur of the commonplace whose spiritual practice of wonder is awesome. Moving through the four seasons in southeastern Nebraska, he doesn't want to miss a thing. There are surprises awaiting him everywhere he turns.

One day, for example, he is tickled pink to see his first bobcat while out driving. "I delight in the things I discover right within reach." Another time, after reflecting upon the way country folk never seem to throw away anything that might someday have a use, he learns his sister wants to bake a pumpkin pie but doesn't have any cloves. Kooser goes to the basement and finds a can of them stashed away by his mother long ago. He knows she would be very pleased that the cloves did not go to waste.

Whether writing lovingly about the outhouse on his property or venting his anger when county spray crews kill the native plums growing along the roadside, Kooser lets us in on his big secret: it is a good thing to savor the place where we live and to lavish it with all the attention we can muster. "Most Nebraskans aren't really talkers. We hold back a lot more stories than we ever let out," he writes. We're glad he told the story about the rich man who ordered every white tulip in the United States for his daughter's wedding. Wooster's accounts of his childhood experiences and his battle with cancer touch the heart. This is a wonderful book to give to a friend who delights in small epiphanies and the little details that can make all the difference in the quality of our lives. 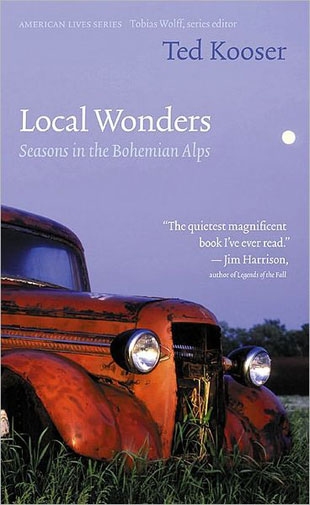