By Alan Watts
Out of Your Mind: Essential Listening from the Alan Watts Audio Archives presents six lectures that ably display this renowned teacher's knowledge of Eastern wisdom.

Alan Watts (1915-1973) published more than 25 books on the philosophy and psychology of religion and is considered one of the premier interpreters of Eastern wisdom in the West. This eclectic and idiosyncratic thinker wore many hats in his long, controversial, and contentious career: Anglican priest, graduate dean, broadcaster, calligrapher, philosopher, and colorful cultural commentator. Watts was very savvy about communicating his ideas to millions via books, radio broadcasts, tape recordings, and public talks. As a self-described "spiritual entertainer," he lectured in a creative, relaxed, and lively style that appealed to both scholars and the general public.

On these 12 CDs, Watts comes across as both a confident philosopher of religion and as a spiritual trickster whose enthusiasm for ideas is contagious. Out of Your Mind contains six digitally-restored seminars running fourteen and one-half hours. They have been selected from hundreds of recordings by Alan Watts' son Mark. The six seminars are: The Nature of Consciousness, The Web of Life, The Inevitable Ecstasy. The World as Just So, The World as Self, and The World As Emptiness. Here Watts puts on display his wide-ranging knowledge about Eastern and Western philosophy. Whether exploring the myth of ourselves based on our separation from others, the nature of selfishness, the fallacy of misplaced concreteness, or the illusion of the ego, Watts takes delight in demolishing the traps of conventional thinking. He asserts that we miss too much of the diversity and majesty of our experience when we close ourselves off to mystery, playfulness, and improvisation.

Watts hits high stride on the CDs where he charts the treasures of Zen, Hinduism, and Buddhism. This author was well-known for the sharpness of his insights into Zen as "the pathless path." Here he talks about the golden age of Zen, the Japanese Zen monastery, koans, and the truth of the birthless mind. On the two CDs on Hinduism, Watts explores self as play, the yogas, the four stages of life, shedding the masks, and gamesmanship in spiritual practice. On the last two CDs, he muses on The Four Noble Truths, the Eight-fold Path, the mystery of change, the world as void, and considering death.

Listening to these lectures, one cannot help but say a quiet note of thanks to this adventuresome spiritual explorer for his finely honed practice of hospitality. Thrilled with the transformation of consciousness and the mutual interdependence of all things, Watts was a generous interpreter of Eastern religions and the quest for meaning in the West. 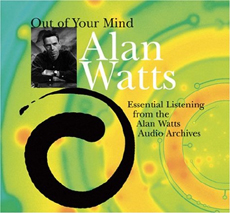