The Wisdom of Forgiveness Intimate Conversations and Journeys

By His Holiness The Dalai Lama, Victor Chan
Fascinating dialogues about this important spiritual practice along with compassion, interdependence, emptiness, and much more.

Victor Chan, who resides in Vancouver and works at the Institute of Asian Research of the University of British Columbia,. met the Dalai Lama in 1972 at Dharamasala and over the past three decades has traveled the globe with him. As a good friend, this Chinese man from Hong Kong has been with the Tibetan leader during private meditation sessions, conversations with world leaders, and special learning exchanges between Buddhists and scientists.

In this volume, Chan presents his intimate conversations with the Dalai Lama. He marvels at the versatility and stamina of this Tibetan leader who continues to arise at 3:30 am in order to recite mantras and prayers. His heart, according to doctors, resembles that of a 30-year old rather than a man in his late sixties. Chan reports on the findings of Paul Ekman, a lifelong student of faces and what they reveal about people, who stated that he has never seen one like the Dalai Lama's: "His facial muscles were vital and supple, they seemed to belong to someone in his twenties. . . . With the possible exception of some young children, the Tibetan leader's face was the most guileless one encountered by Ekman in his decades of research. And like these children, the Dalai Lama was totally at ease displaying his emotions."

One of the meditation practices that the Dalai Lama uses, which may have contributed to his vibrant spirit and positive attitude, is called giving and taking. Each day he takes in the suffering and negative emotions of others and breathes out compassion and forgiveness. When Chan asks him how he fosters forgiveness, the Dalai Lama answers that he sees his enemies as people, like him, who want to achieve happiness and to avoid suffering. He also is convinced that their welfare is linked to his own.

The Dalai Lama salutes emptiness as a Buddhist concept that strengthens forgiveness. Instead of being defined as "nothing," emptiness, according to Chan, is "just another way of saying that things are devoid of individual, inherent existence. It says that, in the final analysis, nothing — people, thoughts, cars — can exist independently on its own." This is just one of the many interesting insights in The Wisdom of Forgiveness. 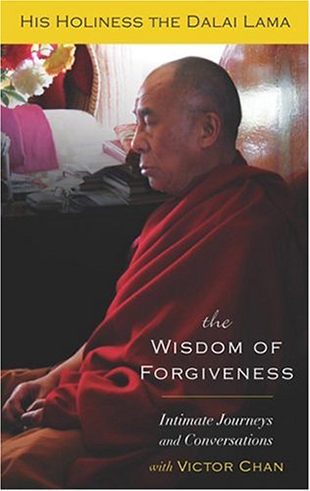