Mercury Retrograde Its Myth and Meaning

By Pythia Peay
A very helpful work on how to go with the flow and make the most of this three-times-a-year astrological event.

This August was the first time we were prepared for Mercury Retrograde. We weren't at all surprised when computer problems stole four hours from us on August 10 or when we continued to be plagued with odd techno problems for the next three weeks. Since Fred is a Virgo, a sign influenced by the planet Mercury, he is particularly sensitive to the disruptions characteristic of this three-times-a-year astrological event: botched communications, things misplaced, services not delivered as promised, technological breakdowns, and general mishaps. This time, we had already read Pythia Peay's wonderful book.

She points out that Mercury rules the spheres of life that include commerce, trade, transportation, and communication. It is only natural that Mercury reversals — when it appears to be moving backwards across the sky — could cause setbacks and slow-downs. The trick, according to Peay, is to go with the slower flow of Mercury retrograde periods rather than fighting against it. Her advice for these periods: "redo, reevaluate, revise, rethink, review, reconsider and reassess." So we adjusted our project schedule in August. We added old movie reviews to the online database. We revisited books by spiritual teachers we have been following for years, posting reviews and finding excerpts. We were careful to doublecheck screening schedules (although we did twice show up at the wrong time). And we braced ourselves for at least one big muck-up — when a company delivered 500 books to us in two giant boxes rather than 50 boxes of ten each. Since the containers wouldn't even fit in our freight elevator door, the books had to be unloaded one by one. Following Peay's advice, we took some time off to ponder what had happened. One lesson: let go; we cannot control these things anyway.

You have just enough time to purchase and read this book before the next Mercury Retrograde period. That's November 30 - December 20, 2004, just in time to mess up holiday deliveries. Good luck! 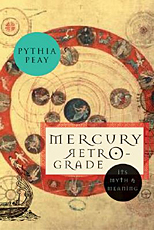